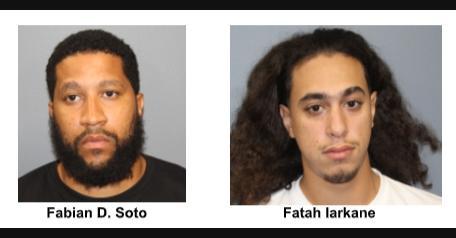 A check of the registration revealed that the truck was reported stolen out of Cobb County, Georgia.  Soto and the passenger, identified as 23-year old, Fatah Iarkane of Secaucus, were arrested.  Police Officer Justin Machno searched the cab of the stolen truck and found a loaded, 9mm handgun along with a single .357 caliber hollow point round of ammunition. Upon inspecting the handgun, it was discovered that it was not a firearm manufactured by any one company and was classified as a “Ghost Gun,” since the gun parts are assembled into a functioning firearm assembled from gun parts without serial numbers.

“I want to praise the ongoing proactive efforts of the Secaucus Police Department’s night tour and its supervisors,” Chief Dennis Miller said.  “This arrest in a residential neighborhood is another example of how this police department is committed to proactive policing and will continue to probe suspicious activity, even while our residents are asleep, to ensure they are safe and their property is protected.”

Soto and Iarkane were both charged with Receiving Stolen Property, Unlawful Possession of a Handgun, Possession of Hollow Point Ammunition, Possession of Handgun Ammunition and Transporting a Defaced Firearm.  Soto was also charged with Certain Persons Not to Possess a Firearm.  Iarkane also had a warrant from Woodbridge with a bail of $1,000.00 and two from Secaucus with bails of $200.00 and $100.00, respectively.   Both men were taken to the Hudson County Jail in Kearny.