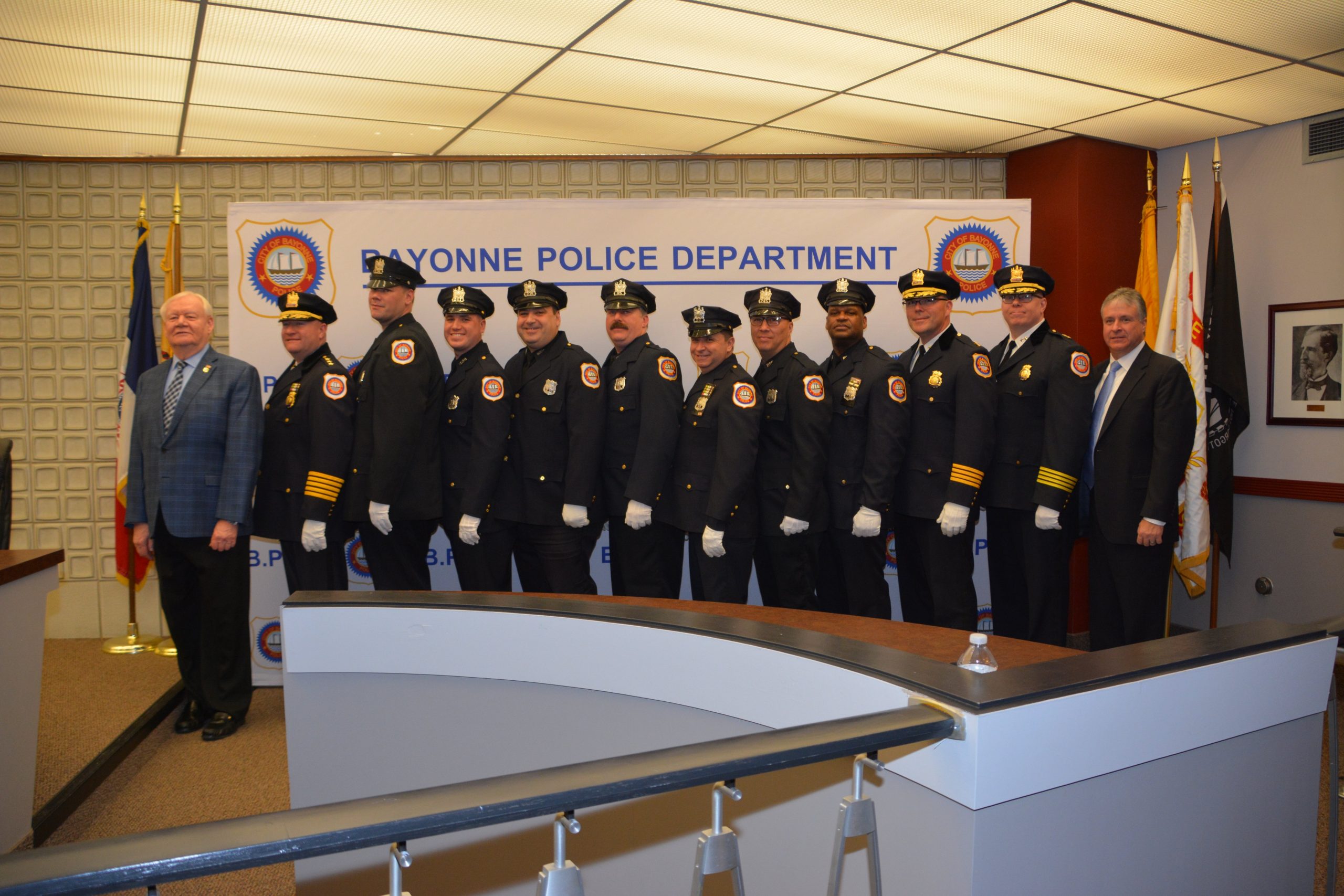 Speaking at the ceremony, Mayor Jimmy Davis, a retired Police Captain, recalled his days working with each of the newly promoted officers.  He said, “It is a great feeling to see them move up in the ranks.”  Discussing the recent fire on Andrew Street, Mayor Davis applauded the actions of the Fire Department, the Police Department, and McCabe Ambulance, calling it “the greatest public safety display.”  He thanked the families of the newly promoted men, and commended everyone for their months of study for their promotional exams.

Public Safety Director Robert Kubert cited the new Sergeants for their “professionalism, dedication, and honor.”  He thanked Mayor Davis and the City Council for their “unyielding support of public safety.”

Police Chief Robert Geisler called the new Sergeants “well-rounded police professionals.”  He expressed confidence that they would “continue the tradition of providing the highest level of service.”

Speaking on behalf of the City Council, Council President Sharon Ashe-Nadrowski said the promotees “have earned this rank.”  She called the Bayonne police “a second-to-none department.”

Sergeant Joseph Styles was appointed to the Bayonne Police Department on September 3, 2002. During his time with the department he has been assigned to the Patrol Division. He is a graduate of Bayonne High School as well as Wagner College, where he received a Bachelor’s Degree in Sociology.

During his assignment to the Patrol Division, Sergeant Styles has received 3 Excellent Police Service awards and 2 Commendations. He is also one of the first two Animal Control Law Enforcement Officers for the City of Bayonne.

Sergeant Mark Fabbricatore was appointed to the Bayonne Police Department on January 16, 2001. He is a graduate of Hudson Catholic High School and attended New Jersey City University.

During his time with the Department he has served in the Community Orientated Policing Unit, the Cops In School Unit and the Patrol Division where he has earned 1 Commendation and 2 Excellent Police Service Awards. He was the 2006 Italian American Officer of the year and a 2007 Robinson Royal Hero. He is a New Jersey Department of Health Emergency Medical Technician Instructor as well as a current Police Training Commission Instructor in Ocean County. Prior to joining the Bayonne Police Department, Sergeant Fabbricatore was a member of the Hudson County Sheriff’s Office.

Sergeant Matthew Lindquist was appointed to the Bayonne Police Department on August 9, 1994. A lifelong resident of Bayonne, he is a graduate of Bayonne High School.

During his time with the Department, he has spent time in the Patrol Division, the Vice Unit, and the Detective Unit. He has also spent time working in conjunction with the Essex/Union County Auto Theft Task Force, the Hudson County Municipal Task Force, and the Hudson County Rapid Deployment Force. Sergeant Lindquist has earned 6 Commendations and 4 Excellent Police Service Awards with the Bayonne Police Department. In addition, he has also earned 11 awards for his investigative work with outside agencies.  Sergeant Lindquist is the State Delegate for the Bayonne Policemen’s Benevolent Association

Sergeant Carmen J. Cutro was appointed to the Bayonne Police Department on January 16, 1995. He is a graduate Bayonne High School.

Sergeant Chester Konopka was appointed to the Bayonne Police Department on September 3, 2002. A lifelong resident of Bayonne, he is a graduate of Bayonne High School.

During his time with the Department, Sergeant Konopka has been assigned to the Patrol Division where he has received 1 Departmental Valor award, 1 Commendation, and 14 Excellent Police Service awards. He was also the 2013 Police Officer of the Year.

Sergeant Steven M. Rhodes was appointed to the Bayonne Police Department on July 12, 1999. He is a graduate of Bayonne High School, and attended St. John’s University where he pursued a Degree in Criminal Justice. Sergeant Rhodes is one of 6 children born to Delores and Leroy Rhodes.