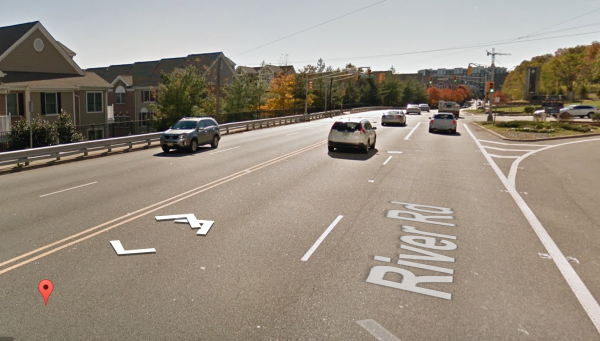 According to a witness, Jennese Pena, the car was speeding west of the complex on River Walk Place, then made a right driving on the side of the road, knocking over a fence and eventually stopping after it had struck a tree.

A West New York Police officer who arrived on scene says he saw the car fall from the cliff above after striking a tree.

River Road was closed for several hours in the area of the accident, causing traffic to snarl in both directions.

The cause of the crash is under investigation, but according to our sources – the driver,  Paul Albanese of Undercliff Avenue suffered a medical emergency (possibly a heart attack).

Port Authority Police officers actively performed CPR on Albanese because they say he was unconscious and not breathing when they took him out of the car.

Also on scene was North Hudson Regional Fire and Rescue.

Officers canvassed the area for possible cameras and surveillance systems that may have captured footage valuable to accident investigators.

The scene was turned over to accident investigators and the Hudson County Sheriff’s Department.

Stay tuned to Hudson TV for more on this developing story.