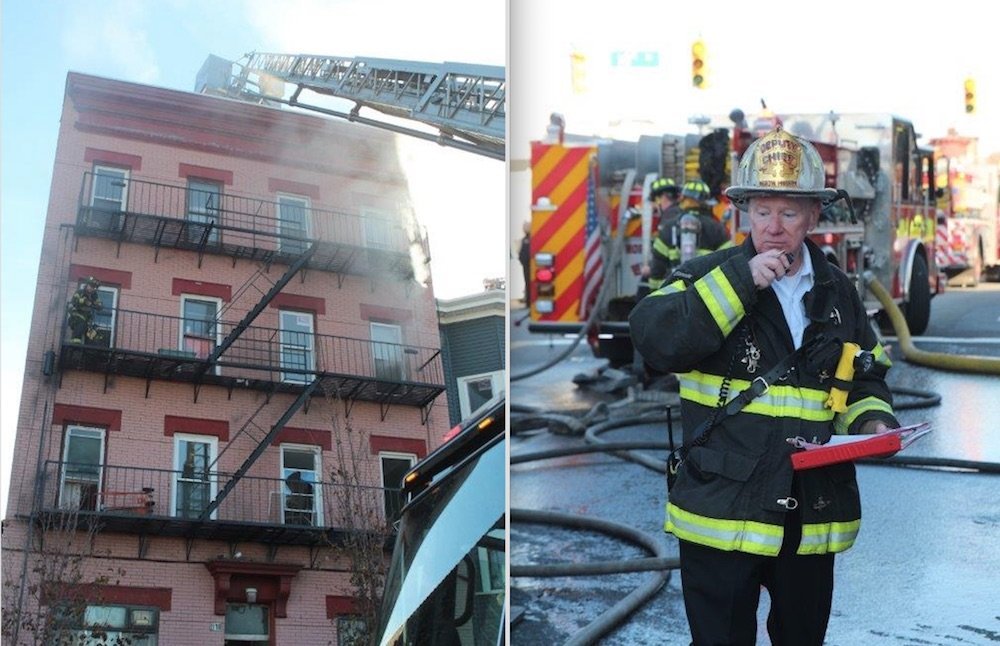 North Hudson Regional firefighters begin their tour of duty at 7:30 a.m..  On Tuesday November 28th, Group 3 prepared to say “goodbye” to their deputy chief who was retiring after 44-years of service, but duty called first.

At 7:31 a.m., fire companies were dispatched to a reported fire in the area of Palisade Avenue & Sixth St.  Smoke was visible from a distance as responding units were re-directed to the 14th Street viaduct, that connects Union City with Hoboken.  A brush fire sent looms of smoke into the sky.  The hard to reach fire, on the Palisades, took some time to get a hose line into place and extinguish the flames.

As firefighters were still operating here, and at another alarm, Fire Control dispatched a full assignment to 910 Kennedy Boulevard, Union City, for a reported structure fire, at 9:35 a.m.  In- coming companies were also informed by Fire Control that there were reports of people trapped and on fire escapes.  Smoke was again visible from a distance.

Two men were on a fire escape, but the drop latter to the ground did not work.  Firefighters set up ground ladders to rescue them.  Two woman inside the building did not appreciate this means of egress and refused to climb down ladders.  After the original body of fire was knocked down in a first-floor apartment, firefighters escorted them out the front door.

Additional ambulances were ordered and a third-alarm struck by Deputy Chief Mike Cranwell, for additional manpower.  Companies, still at the brush fire, were assisted by city police and sheriff officers by moving hose lines off the viaduct to let those fire companies respond to the fire.

Flames extended upward through a pipe-chase and walls to upper floors of the four-story structure.  As firefighters opened up the walls on the second floor, above the fire apartment, there was heavy fire showing.  The flames were extinguished and the fire was stopped before it could affect the third-floor.

Residents were placed into a city police van and the Red Cross was at the scene to offer assistance.  The Jersey City Gong Club responded with bottled water for the exhausted firefighters, and coffee was offered to the members by the Coach House restaurant, across the street.

Chief Montagne expressed how D.C. Cranwell was instrumental in improving the department and making conditions safer for all.