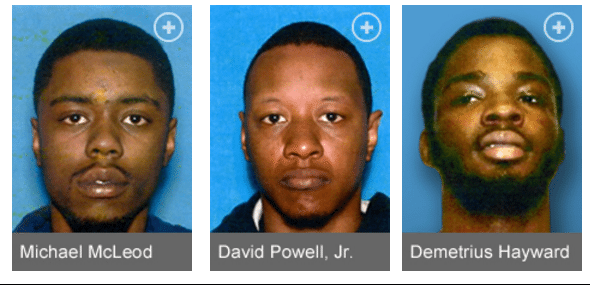 TRENTON – Acting Attorney General Robert Lougy announced that three men pleaded guilty today to human trafficking charges for trafficking a 14-year-old girl in a prostitution ring that they operated in hotels in and around Hudson County. The boss of the ring was among the defendants who pleaded guilty.

Judge Galis-Menendez scheduled sentencing for all three men for May 13.

The investigation began in April 2015 when the FBI Task Force received a tip from the National Center for Missing and Exploited Children that photos of the 14-year-old victim, who was a runaway from South Jersey, were being used in ads for a “female escort” on backpage.com. The investigation revealed that McLeod used violence or the threat of violence to control the two victims who were prostituted by the defendants: the 14-year-old and an 18-year-old woman. McLeod once held a gun to the head of the 18-year-old and threatened to kill her. Other times, he beat and kicked her. McLeod and his assistants put the victims up at hotels where they were required to prostitute themselves under the control of the defendants. Each victim had sex with up to 10 customers a day, making up to $800, all of which McLeod collected. The four defendants were arrested in May 2015.

“This case starkly illustrates how human traffickers separate their victims from any benevolent support and trap them in a wretched life of sexual slavery,” said Acting Attorney General Lougy. “McLeod was a brutal bully who controlled his teenage victims with fear and violence. We have put him behind bars where he can’t harm any other vulnerable young women.”

“We will continue to work tirelessly with our law enforcement partners to prosecute human traffickers and rescue victims like the young runaway in this case,” said Director Elie Honig of the Division of Criminal Justice. “These crimes occur in the shadows, and the key to bringing them to light is the vigilance of members of the public and their willingness to come forward. We urge anyone who suspects human trafficking to call our confidential hotline.”

Special Agent in Charge Timothy Gallagher of the FBI Newark Division said: “The FBI working jointly with our law enforcement partners on the Child Exploitation Task Force is committed to pursuing the human traffickers who prey upon the children and exploit the vulnerable in our state.”

An undercover detective from the FBI Child Exploitation Task Force telephoned the number in a backpage.com ad containing photos of the missing runaway and arranged a “date” for April 9, 2015 at a motel room in Secaucus. When the detective went to the motel, he was met by the 14-year-old girl as well as the 18-year-old victim, who was assigned to keep track of her. After the 14-year-old girl offered the detective sex for money, officers entered the motel room and took custody of the two teenagers.

Further investigation revealed McLeod’s status as “pimp” or “boss,” as well as the roles of the other men. McLeod relied on Powell, Hayward, and allegedly a fourth defendant – Tyree D. Jeter, 28, of Jersey City – to control the girls when he was not around and ensure they were not free to leave. Powell would act as a “body guard” for the girls, waiting outside while they were with customers. Hayward transported the girls between hotels. Hayward and Powell also brought food to the girls or took them out to eat, because McLeod did not let them have any money. McLeod collected all of the money from the girls. He gave Hayward and Powell – and allegedly Jeter – a small percentage of the money, but kept most of it for himself.