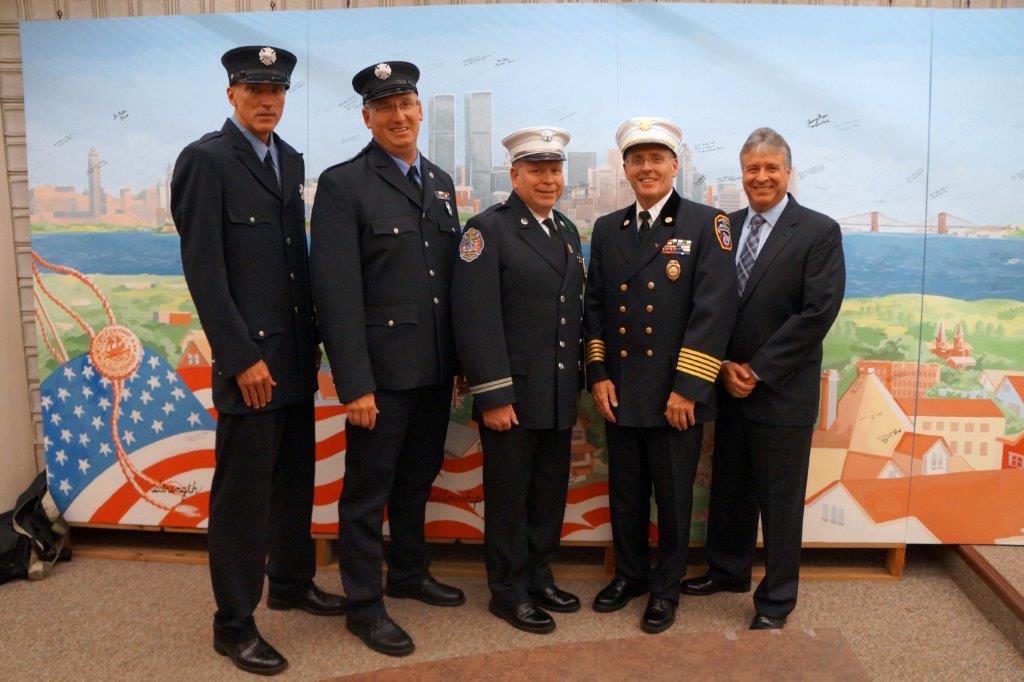 Public Safety Director Robert Kubert described the promotions as “well-deserved, well-earned.”  Kubert advised the promoted officers to “pass on your experience” to the newer firefighters.  Kubert thanked Mayor Davis and the City Council Members for recognizing the need for promotions, in order to fill the vacancies left by recently retired superior officers.  Kubert expressed gratitude for the sacrifices made by the firefighters’ families, who “gave up a lot of time” with them while the officers took classes and studied for their examinations.

City Council President said that the families of the promoted officers “should be very proud.”  She thanked Coughlin, Petrakian, and O’Sullivan “for your past and future service.”  City Council Member At-Large Juan Perez said the three promoted firefighters “worked very hard.”  He called their period of study for the examinations “a complete sacrifice.”  First Ward Council Member Tom Cotter commended the three men, and reminded everyone that the younger firefighters “look up to the senior firefighters.”

Fire Chief Keith Weaver said that a promotional ceremony is “always a great day.”  He pointed out that there is just a small number of positions with the rank of Battalion Chief.  Weaver described new Battalion Chief Timothy Coughlin as a firefighter with “knowledge, drive, and determination.”  The Fire Chief congratulated Petrakian and O’Sullivan on achieving the rank of Fire Captain, “the first superior rank.”  Weaver said that all three newly promoted firefighters would have to make “split-second decisions during emergencies.”  He said that leadership “is earned,” and that it is “achieved and developed over time.”  Addressing Coughlin, Petrakian, and O’Sullivan, Chief Weaver said, “All of you have what it takes to succeed.”

Battalion Chief Coughlin was appointed to the Bayonne Fire Department in 1990, and was assigned to Engine 3.  Later, he was assigned to Engine 5.  Coughlin was promoted to Lieutenant in 1999, and was assigned to Truck 1.  In 2004, he was promoted to Captain, and was assigned to Squad 5.  Currently, he is assigned to headquarters and has been performing the role of acting Battalion Chief of compliance.  His licenses and certifications include: Incident Safety Officer, Fire Officer 1, Hazardous Materials Technician, and Rescue Swimmer.  He has received the following recognition awards: Class C Valor Award, Director’s Award for Service, 9-11 Service Pin, two Departmental Commendations, and Special Recognition Awards from both the St. Barnabas Burn Foundation and the New Jersey Firemen’s Mutual Benevolent Association (FMBA).

Captain Petrakian is a graduate of Bayonne High School.  He was appointed to the Bayonne Fire Department in 1997.  His assignments with the department have included Engine 3, Truck & Ladder 2, Engine 4, Aide to Battalion Chief 1, and the Multiple Services Unit.  He is the former President of FMBA Local 11, and is also a former FMBA Trustee and State Delegate.

Captain O’Sullivan is a graduate of Bayonne High School.  He graduated from St. Peter’s College with a degree in Business Administration.  He was employed previously in the financial sector with Prudential Securities and JP Morgan Chase.  He was appointed to the Bayonne Fire Department in 1999, and was assigned to Engine 6 and Truck & Ladder 2.