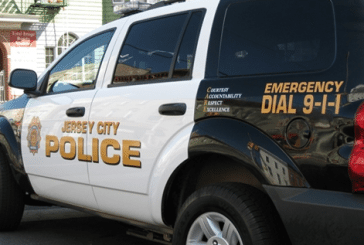 On July 13, 2016 Jersey City police arrested three teens, two from Newark and one from East Orange, after a vehicle pursuit of a stolen vehicle this morning on Newark Avenue in which the driver rammed the stolen vehicle into a police car, injuring one officer.

The officer, who sustained back and neck injuries, was transported to the Jersey City Medical Center-Barnabas Health for treatment of the non life-threatening injuries.

Jersey City Police assisted in the vehicle pursuit, which was initiated by the Hudson County Sheriff’s Office, just after 7 a.m. on Central Avenue and Newark Avenue.  The driver continued to flee traveling along Newark Avenue, but eventually was blocked by a Jersey City police vehicle at the area of Newark Avenue and Herbert Place. At that time the driver of the vehicle backed up ramming the police cruiser.

The driver, Khalyl Harley, 18, of Newark, was charged with aggravated assault on a police officer, eluding, burglary, receiving stolen property, and providing false information after initially providing police with a false name.