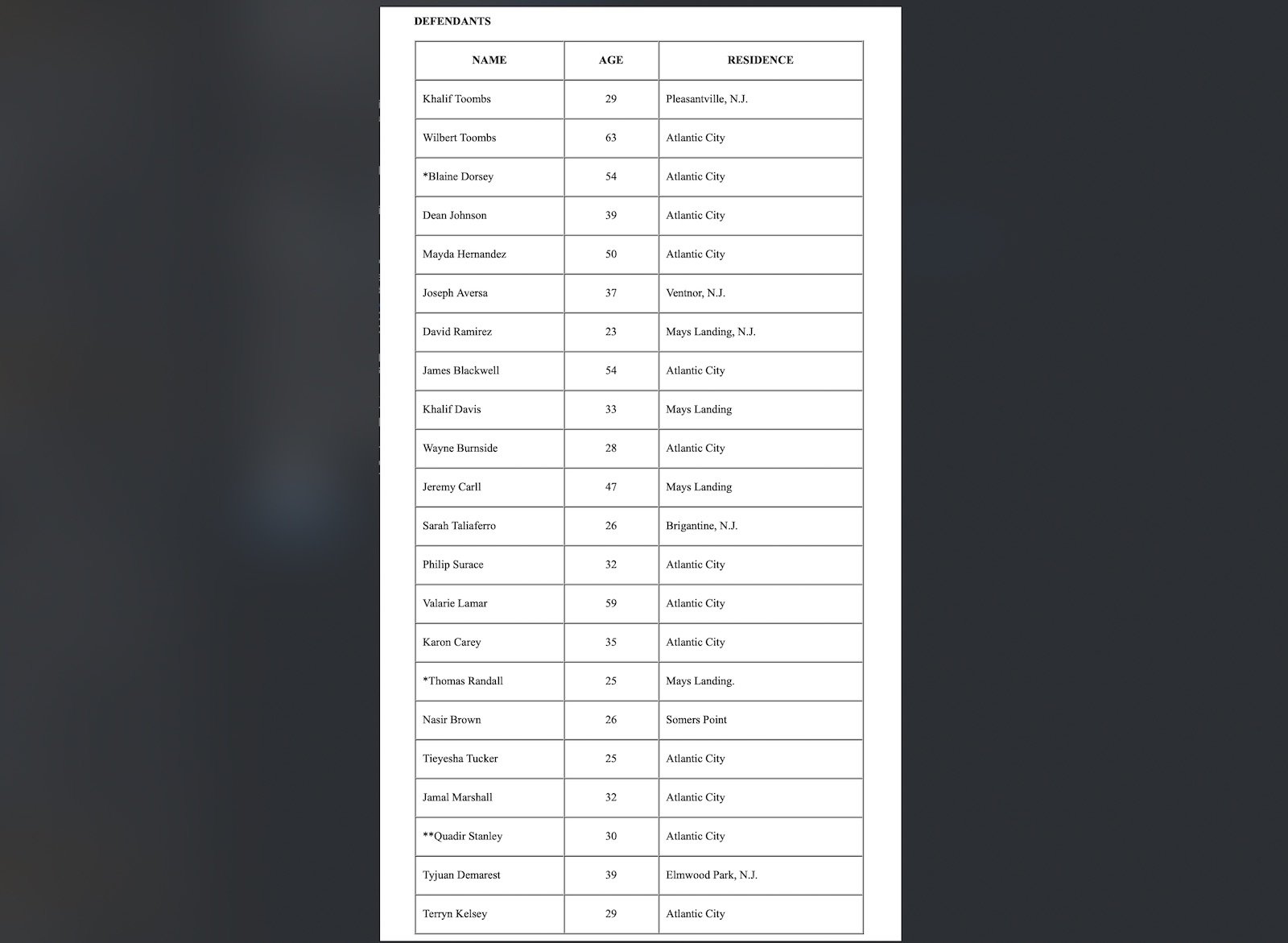 CAMDEN, N.J. – Twenty-two people have been charged for their roles as members, associates, and suppliers of an Atlantic City, New Jersey-based drug-trafficking organization that distributed heroin throughout the area, U.S. Attorney Craig Carpenito announced today.

“The defendants charged today have been flooding the streets of Atlantic City and surrounding towns with heroin, often with tragic results,” U.S. Attorney Carpenito said. “Numerous deaths and overdoses have been linked to the ‘brands’ pushed by these drug traffickers. With our law enforcement partners, we are working to get these drugs, and the organizations that distribute them, off the streets of Atlantic City.”

“From international terrorists to street level drug dealers, the FBI is committed to keeping you safe,” FBI Special Agent-in-Charge Gregory W. Ehrie said. “Today’s operation should serve as a warning to those thinking of filling the void created by the arrests – we aren’t finished. Our agents are dedicated and persistent. We will continue our efforts to free the community of deadly drugs and drug dealers. We will continue on our mission to protect the public.”

“This is a great day for Atlantic City, and a great day for Atlantic County,” Atlantic City Police Chief Henry White Jr. said. “The dismantling of an organization that has brought sorrow and anguish to so many families through the distribution of deadly narcotics is a win for the community. Together, with our federal, state and local partners, we have showed those that wish to invade and flood our neighborhoods with deadly drugs that it will not be tolerated. We will continue to fight on behalf of the men, women and children of our respective communities.”


According to the documents filed in this case and statements made in court:

An authorized wiretap investigation revealed that from April of 2017 through June of 2019, the drug trafficking organization’s leader, Khalif Toombs, operated a massive drug distribution ring, utilizing multiple stash houses throughout Atlantic City and numerous drug couriers to re-distribute the heroin. Toombs and his associates coordinated their efforts through the use of phone calls, text messages, and social media. The investigation revealed that Toombs obtained his heroin from a supplier in Paterson, New Jersey, and used Atlantic City associates to make frequent trips to Paterson to obtain his resupply of heroin.

Through the course of the investigation, the FBI determined that Toombs and his associates were distributing multiple “stamps,” or brands, of heroin, including “AK-47,” “Apple,” “Fortnite,” “Rolex,” “Frank Lucas,” “Bentley,” “Pandora,” and “9 ½.” Between Jan. 1, 2017, and June 21, 2019, drugs with these stamps have accounted for 48 deaths and 84 non-fatal overdoses in New Jersey, according to the N.J. State Police Office of Drug Monitoring and Analysis.

The count of conspiracy to distribute or possess with intent to distribute more than one kilogram of heroin with which each defendant is charged is punishable by a minimum of 10 years in prison and a maximum of life in prison.

The government is represented by Assistant U.S. Attorney Martha K. Nye of the U.S. Attorney’s Office in Camden.

This case was conducted under the auspices of the Organized Crime Drug Enforcement Task Force (OCDETF). The principal mission of the OCDETF program is to identify, disrupt and dismantle the most serious drug trafficking, weapons trafficking and money laundering organizations and those primarily responsible for the nation’s illegal drug supply.

The charges and allegations contained in the complaints are merely accusations, and the defendants are considered innocent unless and until proven guilty.