U.S. & BRITISH JETS FLY IN FORMATION OVER THE HUDSON 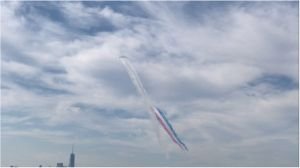 In formation, the jets flew south above the Hudson River, circled Liberty Island – home of the Statue of Liberty – and then flew north along the Hudson with the Blue Angels and the Thunderbirds streaming red, white and blue contrails in the sky.

The following video was shared by a facebook user.