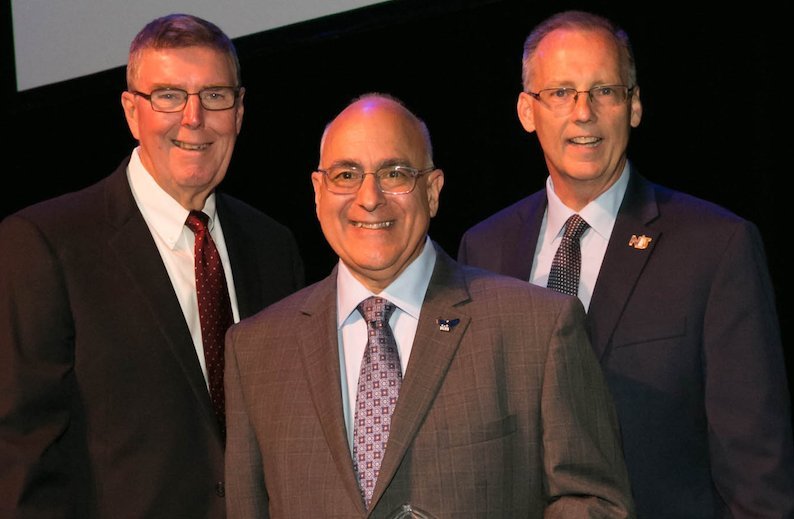 In addition to his tenure with the schools, Dragona has been active in other areas of Union City, including serving as its first director of senior citizen affairs in 1974; he was elected commissioner of public safety in 1983.

Hudson County ASBO President Steven Somick nominated Dragona for the School Business Administrator (SBA) of the Year Award, praising him for his “out-of-the-box” thinking. “Tony has never lost his focus on providing the best for the students he serves,” Somick said. “The opening of Union City High School in 2009 is an example of his passion and out-of-the-box thinking, as evidenced by the athletic field on the second-floor roof.”

A “visionary” is how Union City Public Schools Assistant Superintendent John Bennetti described Dragona. “He has developed both short- and long-term action planning throughout the year that has enabled our district to successfully develop, expand and meet the challenges of educating in an ever-evolving 21st Century,” Bennetti said.

Among his list of accomplishments, Dragona fought to implement Community Eligibility, which enables all students in his district to receive three meals a day at no cost to their families. Joseph Isola, director of communications for North Hudson Fire & Rescue, praised Dragona for being “stalwart in his convictions” to see this initiative come to fruition. He emphasized that Dragona’s “unwavering stance on the impact of nurturing not just the spirit of learning, but the literal way students feel about themselves … has been an inspiration.”

As part of the SBA of the Year Award, Dragona will present a $2,000 scholarship from NJASBO to Union City High School’s HOSA (Health Occupation Students of America) Scholarship Fund.

Dragona received his undergraduate and graduate degrees from New Jersey City University, where he teaches today as an adjunct professor. He completed his doctoral degree in 2014 in organizational leadership and school business leadership.

He has been an active member of the Association of School Business Officials International since 1988, serving on the Board of Directors from 2014-2018. He also is a past president of the organization, which serves more than 5,000 members in 18 countries. Dragona received the 2009 International Distinguished Eagle Award from ASBO International. He also has received the organization’s Certificate of Excellence in Financial Reporting every year since 2002. Additionally, Dragona has been a sub-fund liaison with the New Jersey School Insurance Group since 2010. He also is a member of the New Jersey Association of Supervisors and Administrators, New Jersey School Boards Association and the American Association of School Personnel Administrators.

Dragona has presented numerous workshops for NJASBO and various other organizations. He has provided expert testimony on topics including Abbott Districts, school breakfast, and the merits of bonding before the NJ Joint Senate Committee on School Finance, NJ Senate and Assembly Education committees, NJ School Development Authority and the NJ Department of Community Affairs Local Finance Board. He also has written and published numerous articles on topics ranging from finance and budgeting to school food service, resource management, accountability in education and district human resources.

The New Jersey Association of School Business Officials (NJASBO) is a professional association that promotes the highest standards of ethics and efficiency, provides its membership with professional development and support, and collaborates with entities that affect public education. The organization comprises individuals who administer or supervise a variety of operations within the school district. Examples include accounting, budgeting, data processing, environmental issues, food service management, maintenance, negotiations, payroll, purchasing and transportation. For more information, visit www.njasbo.com.