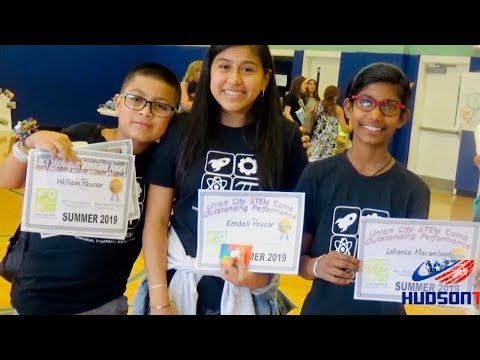 They learned to communicate, design and build at the Summer STEM Camp program at Colin Powell School in Union City and now three STEM scholars share their amazing experiences and enlightening journey.

“I though I learned how to let be understood and understand what STEM is, how to help each other, how to use other resources, says STEM scholar, Lehansa Marambage, awarded the Union City STEM Camp Outstanding Performance.

According to Kendall, she goes way back with science.

“Before I used to get scared of science, but when I came into the STEM program it was like amazing. It’s fun, you learn, you get to do solar power.

This isn’t your typical summer camp – there are unique, hands-on experiences using science, technology, engineering and math designed to build interest, knowledge and technical skills the campers can take with them into the classroom and beyond.

“It’s exciting to be a part of this because we get to see children come back year after year since it is a progressive program,” says Mary-Kate Hagedorn, Union City School District media specialist. “And we get to see them develop where they’re not only interested in the skills but interpersonal skills.”

The program helps them take their curiosity, translate it into something they can exhibit and really tap into skill sets they may not even know they had.

“For instance these Pinbox machines, they get to create the theme themselves, get to design it and have a vision themselves. It’s not like teacher directed; it’s more student directed,” Hagedorn says.

And they went right in testing all kinds of things to figure out what it really means.

“So I did an experiment about water transportation, how water can go into any form and travel anywhere. So we did water projects actually,” Marambage says. “I was helping sustainability class and we have pinball machines and presentations.”

“I have been working at gluing a hydroponics (system) for Union City.”

What they try to do there is expose the campers to robotics, coding, making. They run three classes at camp — a making class, coding class and…

“We have a sustainability class, which talks about the environment around their world,” says Marcos Navas, technology facilitator with the Union City Board of Education. “And we have a sharing class, where we teach ‘em how to document learning how to shoot videos and how to pretty much create trailers for their learning.”

Every year they are constantly being surprised by the creativity of these young minds.

“Yes, girls in STEM, girls in coding, girls who are no longer saying this is not where I belong,” Hagedorn says. “And the girls add a different dimension to it.”

Marcos Navas says as adults sometimes we look at kids and we don’t really think there’s a lot of deep thought there. But the teachers say they definitely see it with this bunch of kids.

“No matter how crazy an idea is, it is possible,” Navas says. “That’s really the message we try to give the kids — don’t worry how crazy your ideas are we can definitely work on making them a reality.

“They’re thinking, ‘how can we use technology to improve the environment.’ So they’re really because they’re digital native learners they’re bringing that world to us and they’re trying to integrate that with everything they do.”

Judging by how precocious this group is, they’re probably a number of future scientists among the STEM campers.

“Endless number of the scientists because we tell them that there is no end — that if you work hard, if you persevere, if you just keep going toward what you’re talking about, you can do this,” Hagedorn says.

Added Navas, “I am constantly being jaw dropped by the talent and sophistication of these kids and just the way they are thinking.”

These STEM scholars do have lofty goals, but two of them won the outstanding performance award and one won the innovator award at camp, so it certainly seems within reach.

“When I grow up I wanna be a scientist. Maybe biology, helping animals and humans in medicine — so maybe a doctor,” Marambage says.

William also wants to be a scientist.

And Kendall Paucar has her sights on being a special FBI agent.

The STEM training should come in handy for all three scholars.

Menendez Op-Ed: Congress Must Stop Pompeo From Doing Another Arms Deal With Saudis