During Sunday’s standoff in West New York — an officer and the officer’s vehicle were struck by the car 27-year-old Emmanuel Hernandez of West New York was driving as he fled, according to Hudson County Prosecutor Esther Suarez.

He exited his car in front of 608 57th Street and fired a weapon at the pursuing officers and one officer returned fire. Neither the officer nor Hernandez was struck by the gunfire.

Hernandez then barricaded himself in the basement of the house at that location for several hours until he surrendered to police without incident at approximately 2:15 pm.

Officers recovered a handgun and shotgun with a high capacity magazine during a search of his residence.

“This was a spontaneous and extremely volatile situation that could have turned out differently but for the patience and hard work of law enforcement professionals,” the Prosecutor says. “Given the scope and magnitude of the situation, I am thankful that the matter was resolved peacefully.”

She also credited the Bergen County SWAT Team with methodically coordinating the negotiations with the barricaded suspect and its tactical decision-making throughout the ordeal.

The Internal Affairs Unit and Homicide Unit of the Office of the Hudson County Prosecutor
are investigating the officer involved shooting, which is standard protocol.

——————–
It was a tense standoff that ended peacefully after 12 hours when a man fled a traffic stop and  shot at police before barricading himself inside his West New York home, in the early morning hours Sunday.

North Bergen Police had stopped the man on Kennedy Boulevard near the border of North Bergen and West New York.

According to several witnesses, they heard gunshots in the early morning hours before law enforcement converged on the area of Kennedy and 57th Street.

Probable cause based upon information received from responding North Bergen Police Officers to a 911 call of a man with a gun in a red Infiniti vehicle.

According to Mayor Felix Roque, the man (in his 20s) was a military veteran who had weapons inside the home.

More than 250 officers from many local towns, including West New York Police, North Bergen Police and Guttenberg Police were on scene, along with K-9s and heavily armed SWAT teams.  FBI and negotiators from the Hudson County Prosecutor’s office tirelessly tried to persuade the suspect to give himself up.

Residents from surrounding homes were evacuated as a precaution.

The standoff ended around 2:45 p.m. after a police negotiator, the man’s family and the mayor finally convinced the man to surrender.

Roque says they connected on several levels since he and the man are both military vets, he had also treated his deceased father and his wife knew him personally.

It is not yet known what charges the man may face. His name has not been released.

No injuries were reported in the standoff. 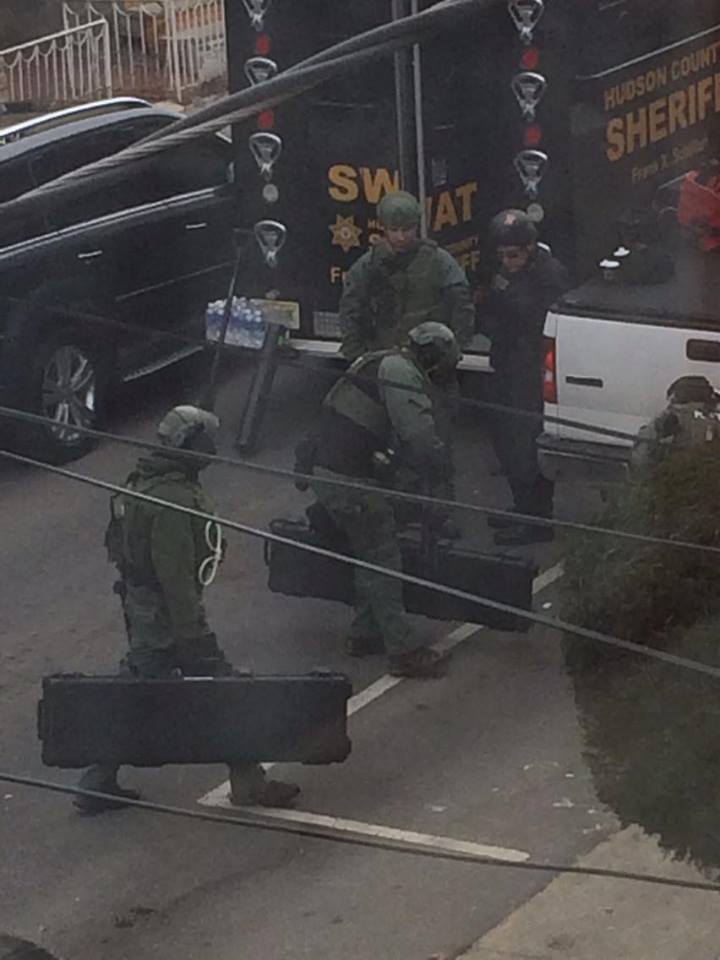