A World War II-era plane (P-47 Thunderbolt) fell from the sky in the area behind Palisades Medical Center in North Bergen around 7:30 p.m, according to sources. 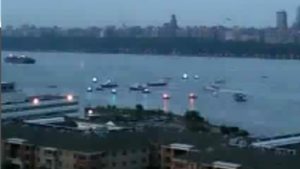 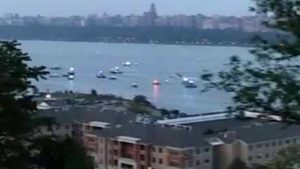 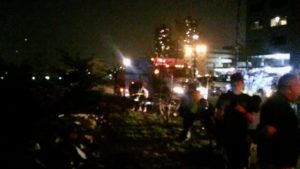 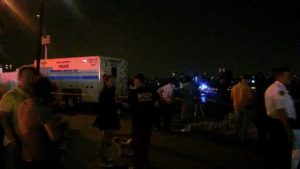 As of 10:30 p.m. authorities said the body of the pilot, 56-year-old Bill Gordon of Key West, Fla. had been recovered.  Late Friday his identity was not available.

Police boats were visible near 79th Street on the west side of Manhattan.

When I spoke with him at 9:50 p.m., NHRFR Chief Frank Montagne told me they were standing by at that hour to try to lift the plane out of the water so divers could find the pilot and any additional survivors.

“The current is too swift so they have the Army Corps of Engineers coming in to try to lift the plane,” Montagne says.

Earlier, the NJSP tweeted that the pilot was rescued and taken to a local hospital with minor injuries, but Montagne says that was not confirmed and the police later said the information was incorrect.

The confusion arose because civilian bystanders had dived into the water to try to rescue the pilot, according to a Coast Guard spokesman.

Witnesses say it was a chaotic and frightening scene and they saw Gordon desperately trying to escape.

As he tried to get out of the cockpit, the plane quickly started sinking, they say.

The plane (and two others with it) were from a Long Island museum.  They were doing aerials to promote the Bethpage Air Show at Jones Beach.

Engine failure is being attributed to the one that crashed, according to a museum spokesman — who says the pilot put it down in the Hudson.

“The plane is on the bottom (of the Hudson) right now,” Montagne said at the time.

Stay with Hudson TV for updates on this story.