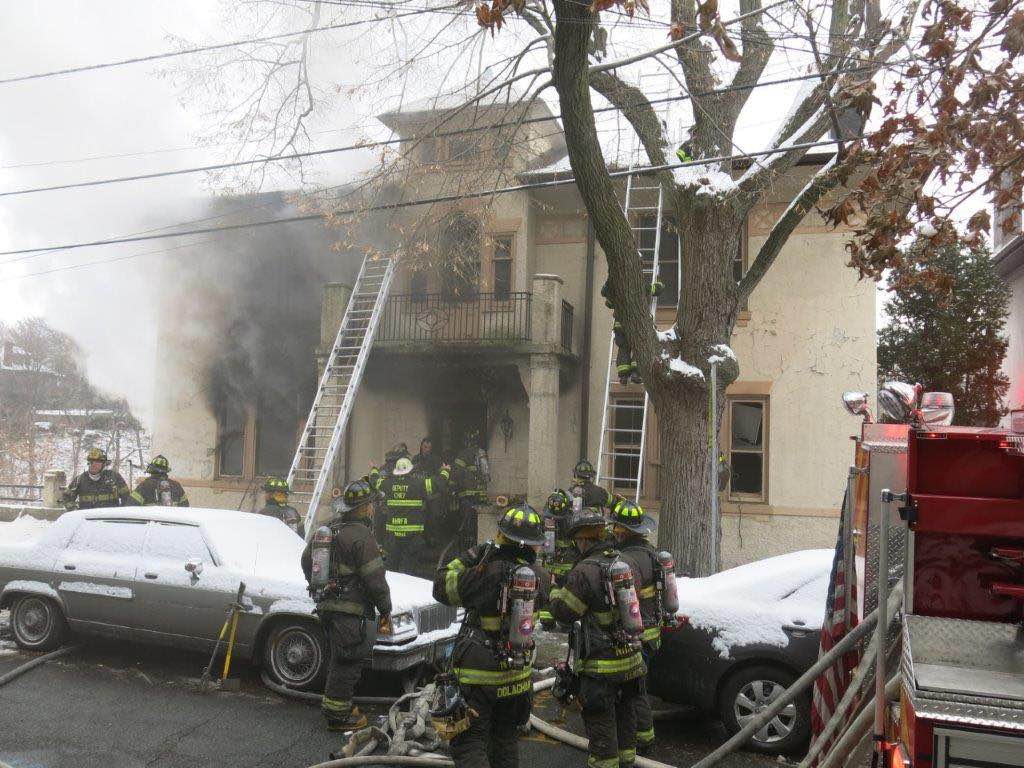 A fire rapidly spread through a two-story building on Sterling Avenue, Weehawken,  Saturday morning.  Besides a freezing temperature, firefighters reported some kind of accelerant liquid on the floor that would flash up at times.  In addition, there was ammunition stored on the second-floor.

At 10:24 a.m., North Hudson firefighters were dispatched to Sterling Avenue, near Jefferson St., for a reported fire.  Township police were the first to arrive and reported to their dispatcher that there was smoke coming from a two-story structure.  This was followed by a report of flames venting out the front door.

Fire companies arrived to find flames showing and a working fire was declared, followed by a second-alarm.  The dwelling appeared to be used primarily for office purposes.

There was fire in the basement and rose above.  Captain  Robert D’Antonio, Jr., of Engine Co. 4, fell through the weakened floor into the flaming basement.  Luckily, he was able to find his way out to safety quickly, and he did not require medical attention.

As fire rose to the second-floor, a third-alarm was struck by Deputy Chief Charles Thomas. Firefighters employed a foam line to cover the accelerant liquid on the ground floor.  During the fire, several loud pop noises were heard, but that was reported to be aerosol cans exploding, and not the ammunition.

It took over an hour to declare under control due to flames extending up walls to the roof, requiring firefighters to use hooks to open up walls and ceiling to get to the concealed fire.

One firefighter was transported to Palisades Medical Center with a non-life-threatening injury.

The Jersey City Gong Club was also on hand to offer bottled water and hot drinks to the soot-covered firefighters.