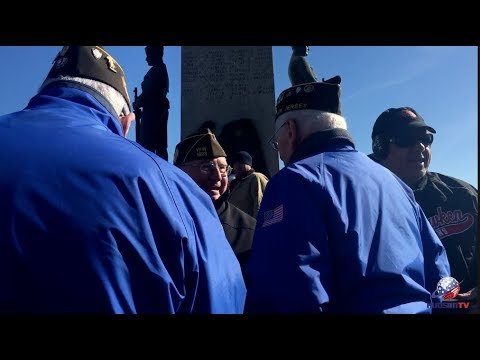 It was another year to remember the veterans who have sacrificed so much – Weehawken saluted their honor, courage and commitment on this Veteran’s Day 2017.

Mayor Richard Turner and the Township Council brought the community together at the Soldier’s and Sailor’s Monument on Boulevard East.

After the ceremony, VFW Post 1923 welcomed all veterans and friends to stop by the post, which remained open all afternoon.

A lost battalion, war heroes — they were all there, but Veteran’s Day tends to become lost over time.

It’s really important for kids today to be raised knowing that when it comes to veterans it’s people who live right around them – it’s their neighbor next door who served.

It’s one of the most brutal battles and by the end of that time, there were very few people in the countries that took part who remained unaffected.

Councilwoman Lavagnino grew up in Weehawken and has been attending this ceremony for years.

The veterans I spoke to said the ceremony is always a fitting tribute to their departed comrades, those who are still serving and those who served in the past.