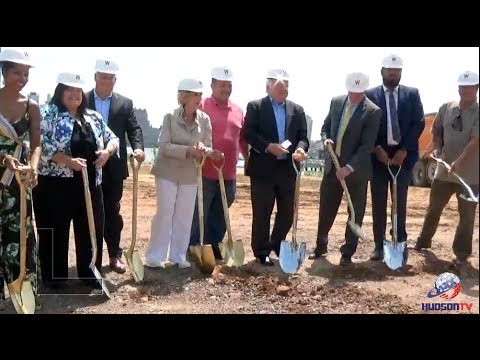 Mayor Richard and town officials broke ground Thursday on a vacant property along the township’s coastline that will be shaped into a $9 million waterfront complex and recreation center, as part of their Waterfront Park expansion project.

“It’s long awaited, it’s been part of all the approvals, part of all the thoughts and desires… and we’re finally today breaking ground on another addition to our township recreation, says Mayor Richard Turner.

According to the mayor, so far they are able to finance the project with almost no cost to any of the taxpayers.

Thirty-five years ago this was totally vacant; all the railroads, all the shipping had gone bankrupt. Then the town acquired the property and everything changed.

“Hopefully it’ll be a quick and easy job if everything goes right, like the mayor said, if there’s nothing in the ground — within a year we’re hoping to be done,” says Mike Dimitrakis, of H & S Construction.

“When I ran in 2010 I was asked by the Hudson Reporter what’s your dream for the town and I said, ‘I’d like to put a pool on the waterfront,” says Second ward councilwoman, Rosemary Lavagnino. “Because my residents and my board wanted to have that. And bingo – not only do we have a pool, but we have four pools.”

It’s been a process with Roseland Properties in the North, now Mack Cali, Hartz Mountain Industries in the southern portion and this whole complex is right in the center of town.

“Wonderful for our community, neighboring communities; it’s pretty far stretched out — these kind of complexes and it’s going to be quite popular once it gets going,” says councilman at-large, David Curtis.

“In my opinion and I’ve seen this from the boat side when we’ve come up here, it seems like it’s going to be one of the best complexes around,” Dimitrakis says.  “The next closest to this is the one in Union City, but it’s no comparison.”

It’s going to be a 17-acre contiguous recreation site with stunning views of the Manhattan skyline.

“Ten acres there, 3.5 here, we just built a half acre pier; we have three acres with a major dog park and recreation site and our concert site,” the mayor says.  “It’ll be the biggest open space on the Hudson River other than Liberty State Park.”

Besides a six-lane lap pool, recreation pool, wading pool, and splash park —the novel idea of an ice rink on the waterfront is now coming closer to reality.

“We’re hoping ice skating for instance, so wouldn’t it be nice not to have to go over to Rockefeller Center and to have our own little holiday pageants here in our own rink,” says First Ward Councilwoman, Carmela Silvestri-Ehret.”


This expansion will provide endless recreation opportunities the town never had.  They never had the place for a major pool complex, let alone an ice rink.

“Especially when the ice rink finishes and the other pavilions and great lawn — they have almost a whole acre of green grass for people to lounge out while enjoying  the riverfront,” Dimitrakis says.

Green spaces are gaining ground everywhere and Mayor Turner and town officials are getting kudos for preserving Weehawken’s landscape.

“This property right here where it’s 3.5 acres and it was proposed for an office building — and the town acquired the property — and ya know, there’s no open space in upper Weehawken; Weehawken’s built,” Turner says.  “So if you’re going to add major recreation areas, you have to do it where there’s open space.”

From township officials to consultants to residents comprising a waterfront committee, this was an all encompassing project that took years of planning.

“We talked about using this site as a pool complex and it’s actually happening,” Lavagnino says.

“What we’re looking forward to is being able to utilize it year-round,” Carmela Silvestri-Ehret says. “I think that’s another key here.”

Being able to share this dream with her residents after such a long time makes Councilwoman Lavagnino really happy.

According to the mayor, they are looking potentially at a summer 2020 opening, with all the park’s new additions.