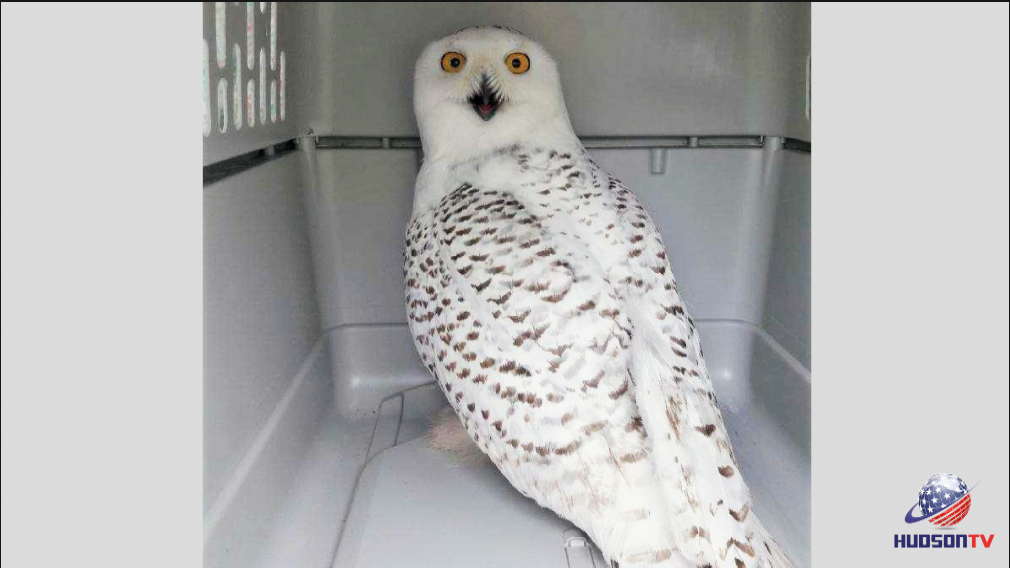 A snowy owl rescued from a Bayonne power plant chimney last Monday was set free yesterday morning at Island Beach State Park after spending the past week rehabilitating at The Raptor Trust.

“Being in captivity is the worst thing, so it was all about getting it out as soon as possible,” says Chris Soucy, the Trust’s executive director.

The juvenile male in beautiful white plumage with flecks of brown was spotted in a chimney at Bayonne Energy Center on Constable Hook, probably finding refuge from the recent storms.

“Coordinated with the New Jersey Department of Environmental Protection. It all came together quickly,” says Trust Rehabilitation Director Cathy Malok, of the owl’s release.

According to Malok, the owl was identified by Scott Weidensaul, director of Project SNOWstorm, which uses cutting-edge tracking technology to study snowy owls.

“We also collected blood samples and sent them to the Baltimore Zoo because they’re doing an ongoing study about toxins (that can affect the snowy owl),” Malok says.

Fernando Rosario, a West New York animal control officer for the New Jersey Humane Society got the initial call and headed to Bayonne for the rescue of a lifetime.

It was really trapped there.

Once the bird flew in, they had shoots going down, so Rosario says it was impossible for the bird to fly back out because of the wingspan.

“They put the harness on me, the hat, the vest… and about 250 feet up on a ladder —you had to climb up the ladder ‘cause he was sitting on the top of the ladder, all the way at the top,” he says.

They were afraid the owl would have died had he stayed there.

“Tried not to startle the bird too much, and he was pretty calm,” Rosario says.

The officer used a handheld net with a pole on it to rescue the snowie.

“Flew down into the scaffold and I just laid it right over it and it just stood still,” Rosario says, adding that he got a rope and hoisted up a cage.

“Checked the bird out and made sure the wings weren’t injured and he was fine… dehydrated,” Rosario says.

They rushed him to Franklin Lakes Animal Hospital for treatment. The next day they took him to the Trust, near the Great Swamp National Wildlife refuge in Morris County, where they care for injured and orphaned wild birds, specifically birds of prey.

According to Rosario, the owl was underweight. “They got enough fluids in him and they’re just gonna do a little blood work,” he says.

“To check for infections and internal parasites, but there were no obvious injuries,” Soucy says. “The owl was really agitated from the trauma it went through.”

The ultimate goal was for the snowie to recover from the ordeal and gain strength so they could send him on his way.

“With a possible release to the shore, depending on what state fish and wildlife biologists feel is best,” Soucy told me last week.

The snowie tends to gravitate toward vast, open spaces like airports that resemble their habitat, Soucy says, adding that as a species, they don’t make a lot of noise and are mostly solitary.

These birds have flocked down to New Jersey — but Rosario says you don’t really see much of them.

“They were concerned about the storm, maybe that’s why it tried to find shelter inside (the power plant),” he says.

According to the website, All About Birds — the snowy owl is one of the few birds that can get even non-birders to come out for a look.

One of the largest North American owls, it shows up irregularly in winter to hunt in windswept fields or dunes.

The Garden State saw a boom of the Arctic-dwelling owls in December 2017 with an abundance of prey, researchers say.

Rosario says once he caught the owl that was the reward in itself.

“Now we could just take this bird to get checked up and make sure it’s okay,” he says.

The snowie was a sight to behold.

“I don’t think I’ll ever experience something like that again in my life,” Rosario says.

It was a collaborative effort, everybody working together for a great cause. “A lot of people involved in this,” he says.

If you come across one of these rare creatures, count yourself among the lucky ones.

“They’re very shy birds — just admire their beauty from the distance,” Rosario says.  “Be mindful, if you see a bird like this, just let the bird be.”

Vainieri Retains Chairmanship of Hudson County Board of Commissioners