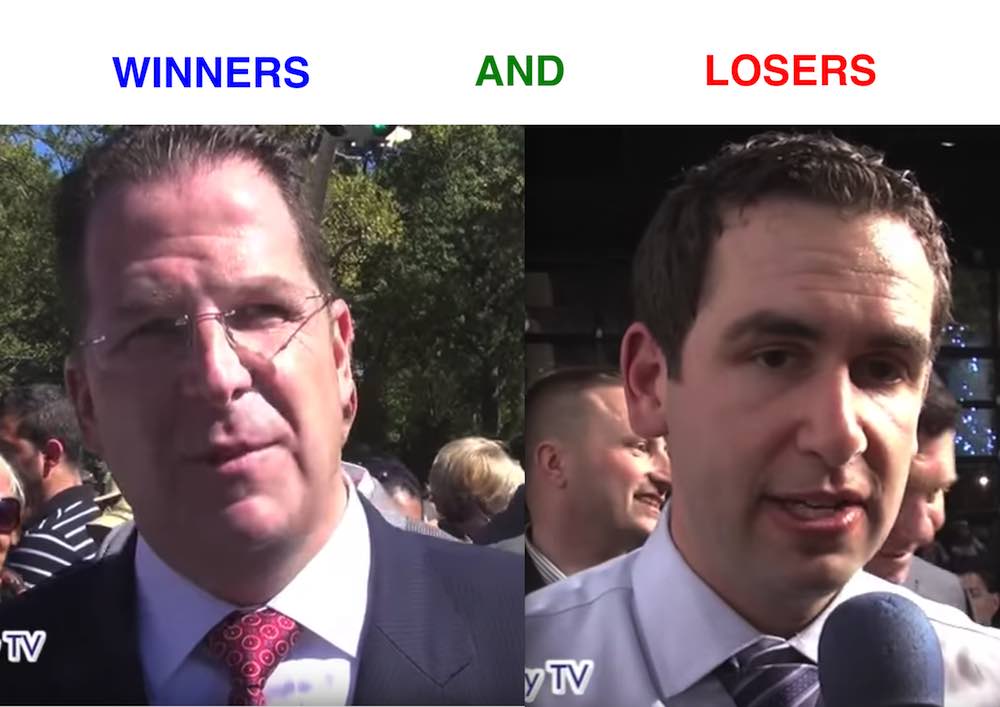 Because winning is relative.

BILL MATSIKOUDIS. Big winner. No. HUUUUUGGGGE winner. Former Healy Administration city counsel. Could he challenge Fulop? Will Fulop run for re-election? We will bet the answers are “yes” on both but Fulop is tarnished and weakened.

BRIAN STACK. Mayor of Union City. State Senator. Huge machine.  Tons of loyal people. This is huge currency for anyone running for Governor. Huge leverage. The biggest winner of the year! Looking forward to our turkey, Brian. Just saying.

NICHOLAS SACCO. Mayor of North Bergen. State Senator. Also has a machine. A winner for the same reason as Stack. But not as much of a winner, because he might have to deal with the Undead Former Opponent below.

LARRY WAINSTEIN. Fulop’s fall is opportunity for this Suddenly Undead Former Loser. But you ask: “Who????” Former candidate for North Bergen, it’s possible he will be perceived as having enough support to be recruited by anyone running for Governor who doesn’t get Nick Sacco’s support next year. That might mean money, bodies, whatever. (Prediction: Wainstein hooks up with John Wisniewski, former Bernie Sanders state chairman.)

THE PEOPLE OF HUDSON COUNTY. Nooooo. Trick or treat.

CHRIS CHRISTIE. Whether you believe David Wildstein (Bridgegate star witness, already pleaded guilty to conspiracy) or not, Christie no longer can escape the stench of his actions. He will never win an election again, not to statewide office, not to Congress, and not in the U.S. Senate to get confirmed to any cabinet seat or ambassadorship. He is the Governor Soprano and maybe he used the U.S. Attorney’s Office well enough to learn how not to get caught. Total chutzpah.

Second worst of all, the major news media is now openly questioning why HE was not charged by the feds. A former prosecutor, being prosecuted? Can you imagine?

Worst of all? The Hoboken train crash (one dead) can be blamed on Christie. The deferred or totally ignored state transportation infrastructure, the refusal to build a Hudson River tunnel and delays in installing automatic train stopping equipment can all be pinned on him. (Others too, but they’re not in office now, and he is.) Can you see this guy winning any election ever again?

STEVEN FULOP. Mayor of Jersey City and witness for the Bridgegate prosecution. Deserves his own special category: MEGA-LOSER! Should own the letter “L”. Did this guy quit Goldman Sachs to get rich?! (What’s worse? He got caught. True Hudson County pols say: What a f*%#$& amateur!) He’s been revealed to (it seems) at least consider trading a Christie endorsement for help for his client, a company called FAPS. Plus. there was a controversy a few years back alleging some truck inspections out of the Jersey City docks were scheduled to bust chops. Huge loser.

MICHAEL ALONSO. Perennial fringe candidate. Not relevant. So who is this guy and why do we care???? Anyone who collects 8,000 signatures for a recall against a sitting mayor (Jimmy Davis of Bayonne), and then doesn’t actually FILE the signatures, deserves mention for being a chump. Trump supporter. Not among the people Trump refers to when he says, “We have the best people.” Saved from huge loser territory because he isn’t relevant. Yet.

THE PEOPLE OF HUDSON COUNTY. Always.

COMMUTERS TO NEW YORK. A bus crash on Monday, a train crash on Thursday. If you take the ferry across the Hudson, put on a lifevest BEFORE you board. Commuting sucks. But this is ridiculous.

THE PEOPLE OF NEW JERSEY. These are your elected leaders.

THE PEOPLE OF AMERICA. Your elected leaders think you’re a bunch of morons with the memories of a sunflower.