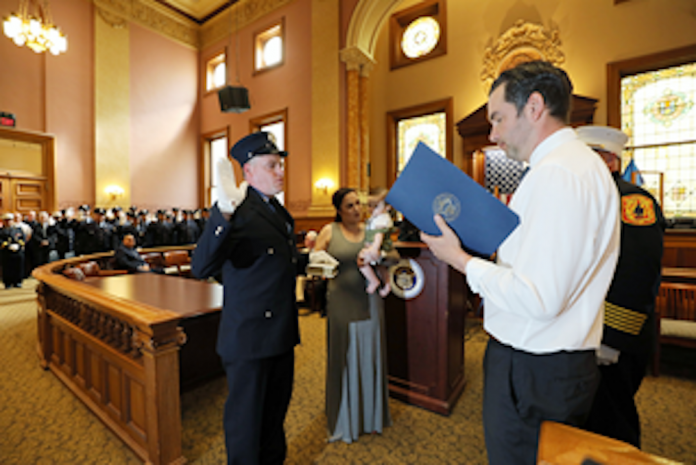 JERSEY CITY – Mayor Steven M. Fulop, Public Safety Director James Shea, and Fire Chief Steven McGill swore in 25 Captains to the Jersey City Fire Department at a ceremony inside City Hall this morning. As a result of Mayor Fulop’s diversity recruitment efforts, for the first time in the Fire Department’s history, minority populations are now represented in every rank department-wide. In fact, Mayor Fulop has doubled the amount of minorities in the rank of Captain alone. 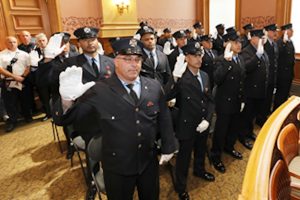 At a time when most fire departments are maintaining or cutting companies, Jersey City is one of the only cities on the East Coast adding and expanding fire safety. Since Mayor Fulop took office in 2013, over 500 uniformed firefighters and superiors have been hired and promoted. Today’s ceremony marked the largest group of Captains promoted since 1989.

“Today is a historic day in Jersey City as we deploy two brand new fire companies for the first time since 1937 while also promoting the largest group of Captains in over 30 years. We’ve come a long way since inheriting a fire department where multiple firehouses were inoperable every single day due to understaffing. From the start, we made it a priority to bolster our elite roster of fire department personnel and services in order to provide our residents with the highest quality of fire protection possible,” said Mayor Fulop.

“Today’s newly promoted Captains will not only fill administrative roles and retirement vacancies, but they will also supervise the two new fire companies that are active as of today, including a brand new High-rise Unit to respond to all high-rise fires and all working fires as a Rapid Intervention Crew,” added Chief McGill.

“From historic promotions to establishing brand new fire companies for the first time in 85 years, we remain committed to further strengthening public safety and fire protection throughout Jersey City,” said Director Shea.  “We have the best fire department in the state bar none, and we will continue to provide our firefighters with the tools they need to stay safe while keeping the community safe every single day.”