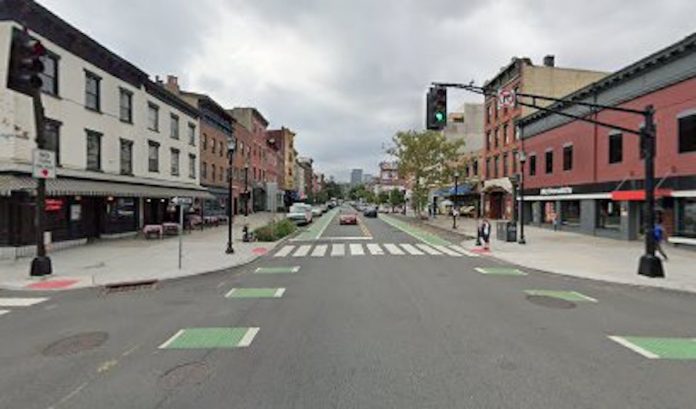 A Sunday night street fight in Hoboken has resulted in the arrests of two men and one, male juvenile.  According to Hoboken Detective/Lt. Danilo Cabrera, officers were dispatched to the corner of Washington and 3rd Streets at approximately 11:53 pm on a report of a street fight.

Upon arriving at the scene, police observed an unconscious man being carried by a group of three individuals.  When two more officers arrived, they placed the unconscious male in the back seat of their radio car and transported him to Hoboken University Medical Center.  He was later discharged from the hospital.

Meanwhile, two additional Hoboken officers arrived and observed a 17-year old juvenile male punch anther man.  The juvenile was immediately placed in police custody.  Officers found, what was believed to be, marijuana in a grinder.

The on scene investigation led to the arrest of 19-year old, Englewood resident Mark Lewis. He was charged with aggravated assault. Also arrested was 26-year old Walid Hamed of Brooklyn for the assault on the unconscious victim who had been taken to HUMC.  He faces charges of endangering an injured victim, aggravated assault and hindering.  The 17-year old faces juvenile delinquency, simple assault, possession of marijuana and drug paraphernalia.  The 17-year old was released into the custody of his parent.

Lewis and Hamed were each issued a summons, released, and ordered to appear in court.

The Hoboken Police are asking anyone who may have information on Sunday night’s street fight, or if you have video of the incident, to please contact Detective Ryan Houghton at 201-420-2109, or email him at houghtonr@hobokenpd.org.