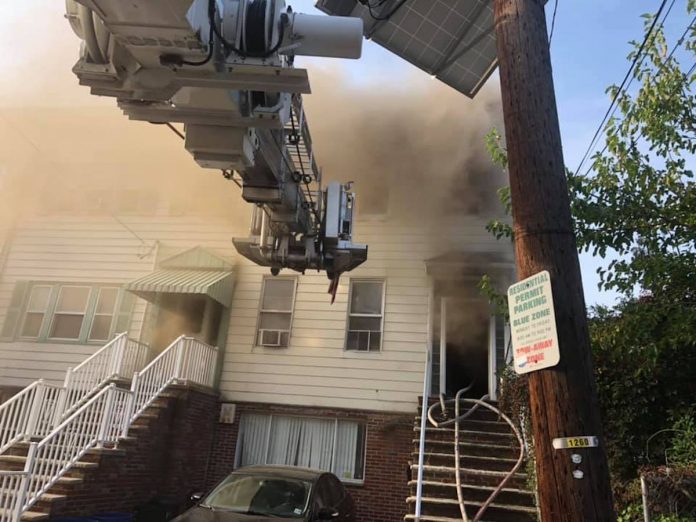 “This morning at 0847 hours the Bayonne Fire Department responded to reported fire at 40 East 22nd St. Arriving fire companies found a working fire on the first floor and a heavy smoke condition in the building. The fire was also extending to the upper floors of the building. Firefighters quickly deployed several hose lines to contain and extinguish the fire. They were able to prevent the fire from spreading to an attached structure to the fire building.

One non-ambulatory resident was removed from the adjacent address of the fire building by neighbors prior to the arrival of the fire department, and was transported by McCabe EMS to a local hospital as a precaution. The fire was placed under control at 1023 hours. Firefighters remained on the scene as of this writing to conduct extensive overhaul and extinguish hotspots within the walls of the building. One firefighter suffered a minor injury at the scene and was treated by EMS. Fire Investigators determined the fire was accidental in nature and caused by an electrical malfunction.

A total of 9 people from two buildings, deemed uninhabitable by the Building Department, have been temporarily displaced and are under the care of the Bayonne Office of Emergency Management and the Red Cross.

On behalf of the Fire Department, I would like to recognize the neighbors who assisted the non-ambulatory resident to safety. Their actions prevented the resident from suffering any injuries.”