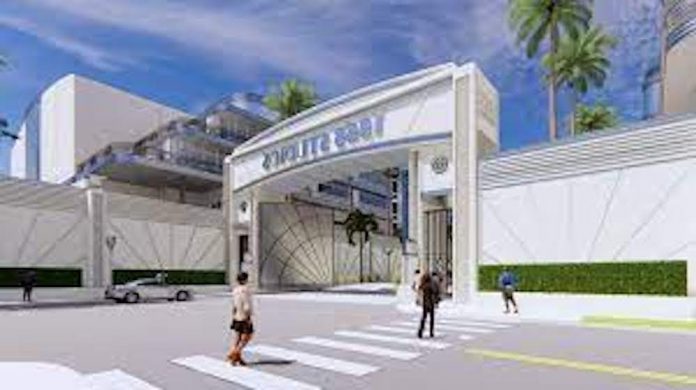 On September 7 in the Bayonne High School Auditorium, representatives of Togus, the redeveloper of Bayonne’s former Texaco property, presented details about the site’s future as a film and television production facility.  The new production center will be named 1888 Studios after the year that Thomas Edison developed his movie camera.  It will be located in the southwest corner of Bergen Point, west of Avenue A.  The construction phase is expected to create 2,000 jobs for the unionized building trades.  Once the studios are in full operation, at least 2,100 permanent jobs will be created.  Depending on production levels, that figure could grow to 3,000 jobs.  Togus, the developer, is expected to invest about $900 million to complete the project.

Introducing the program, Mayor Jimmy Davis recalled growing up near the Texaco refinery, which closed in 1984.  He referred to the construction of a film and TV production facility as “a transformation”  of the former Texaco site. He said that the 1888 Studios would join the Cape Liberty Cruise Port and the Bayonne Golf Club as significant “world-class” facilities in Bayonne.

According to Robert Benecke, the developer’s financial advisor, the property has 70 acres, of which 58 are on land.  Benecke said that preparatory work on the property has been going on for two years.  The developer has already spent about $60 million, he said, primarily on adding clean fill to the soil, which had environmental issues.

Architect Mike White discussed Bayonne’s history as a pioneering film community.  Centaur, America’s first independent film studio, was founded in Bayonne in 1907.  Centaur and Nestor, its California affiliate, merged with other companies to form Universal in 1912.  Mr. White said that the architectural plan is “very respectful” of Bayonne’s street grid.  He explained that Avenue A would be extended into the studio property, and that the production buildings would be three stories tall to fit in with the height of existing Bayonne structures.  About six acres of the property will serve public purposes as parkland and a waterfront walkway.  Mr. White explained that the buildings would be designed in the Art Deco style and would have nautical themes to fit in with the surrounding waters of Newark Bay and the Kill Van Kull.   Like other Hollywood-style facilities, the studio complex will include a water tower.  There will also be landscaping and pedestrian sidewalks.

Jim White, the head of development for 1888 Studios, announced that vertical construction would start in the first quarter of 2023 and would be completed in the second quarter of 2025.  He said that seventeen buildings would be constructed.  In order to protect the property from rising water levels, the land will be raised up by seventeen-and-a-half feet.  He said that a retaining wall would be constructed.  Jim White described the construction as “a 100% union project.”

Brian Livesay, a specialist in design development, explained the jobs that would be created in production and studio operations. Workplaces within the studio complex will include mills, offices, and soundstages.  He said that job categories at the complex would include camera operators, make-up artists, directors, building trades people, and office staff, among others.  He predicted that studio employees would have a very positive impact on Bayonne’s economy by buying goods and services in the community.  Mr. Livesay said that Togus would like to link the studio’s waterfront park with Dennis P. Collins Park, which is locacted nearby.

Bayonne’s financial advisor, Mike Hanley of NW Financial Services, discussed the positive financial impact that the 1888 Studios will have on Bayonne.    Under a financial agreement with the City of Bayonne, the studios will make over $200 million in payments-in-lieu of taxes (PILOTs) over a thirty-year period.  Of that amount, $130 million will go to the City of Bayonne.   He said that the developer would provide over $50 million in public improvements, including the waterfront park and the adjoining  walkway.  Mr. Hanley said that the PILOT agreement with Bayonne was based on the square feet of the project.  Over thirty years, he projected that the payment to Bayonne would grow from $7 million annually to $31 million per year.

A question-and-answer period with the audience followed the presentations.

Second Ward Council Member Jacqueline Weimmer said she was “ecstatic” about the developer’s use of union labor.  She asked about which bank would be underwriting the development.  Council Member Weimmer expressed the hope that the studios could assist local schools or non-profit organization.  Spokesmen for the developer said that no bank has been selected yet for the financing.  They also said the studios would reach out to local schools for educational programs.

City Public Information Officer Joe Ryan inquired about the possibility for naming streets in the development after Centaur, Bayonne’s first film studio, and for various locally born actors.  Architect Mike White and other spokesmen for the developer indicated a definite interest in those ideas for streets around the studios.

Local businessman and show business personality Paul DeAngelo asked about traffic that would be created by the studio jobs.  The developer’s representatives explained that the studios will have a “discrete” separate entrance and that more than 2,100 parking spaces will be provided for the employees, including those who work the overnight shift.

Patrick Kelleher, President of the Hudson County Building Trades and Business Agent for the Plumbers and Pipefitters, thanked Mayor Davis and the City Council for supporting the studio project.  He also said that the building trades will hold a job fair to recruit local workers for the studio construction.

A young resident who studied film expressed an interest in applying to work at the studios.  Company representatives invited him to apply, stating that there would be job fairs advertised through NJ.com.

Mike Ruscigno of the Bayonne Nature Club asked about the timing of the waterfront walkway that will be developed next to the studios.   Company spokesmen explained that it would be built in two phases.  First, piles would need to be installed in the ground.  Later, after more studio construction is completed, the walkway would be built.

Resident Frank Matta asked whether there would be helicopter and boat facilities for the studios.  The developer’s representatives said there were no such plans, because people would arrive there by ground.

Mayor Davis closed the program by thanking eveyone for coming and participating.  He predicted that the studio development “will transform our city.”  The mayor said that Bayonne has moved from “the brink of bankruptcy”  to a “turnaround.”  He said that the forthcoming UPS logistics center at the former Military Ocean Terminal  and the new studio complex were the latest signs of Bayonne’s turnaround.