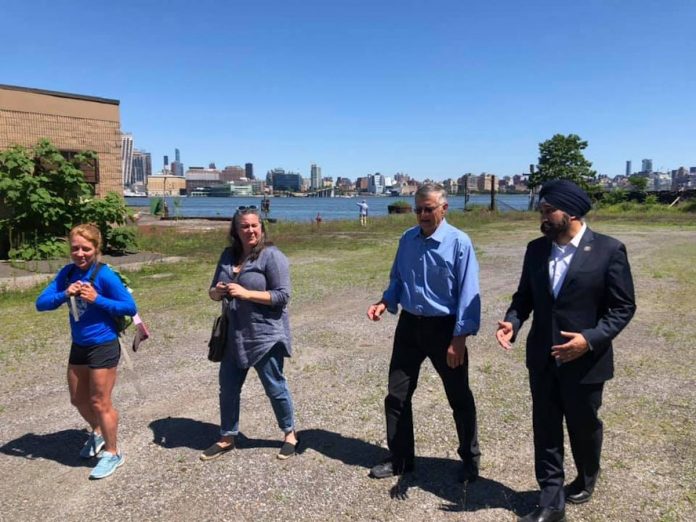 New Jersey Governor Phil Murphy, Hoboken Mayor Ravi S. Bhalla and New York Waterway today announced a historic agreement with the three parties to facilitate the City of Hoboken’s acquisition of the waterfront Union Dry Dock property for the purpose of public, open space. The Bhalla administration and New York Waterway have agreed on a purchase price of $18.5 million for the Union Dry Dock property. New York Waterway will work with the State of New Jersey to explore opportunities to expand their ferry operation at their current location in Weehawken.

“New Jersey is committed to protecting and preserving our shorelines and waterfront areas,” said Governor Murphy. “This agreement is a major step forward in our collective efforts to connect Hudson County’s waterfront and provide more open, public space for all New Jersey residents to utilize. I applaud Mayor Bhalla and New York Waterway for working together to identify a path forward that will not only improve mass transit infrastructure, but also enhance the quality of life and local environment of our waterfront community.”

“The agreement we’ve reached with New York Waterway is one of the most consequential in our City’s history,” said Mayor Bhalla. “Hoboken has been fighting for a continuous waterfront for decades, and I’m beyond thrilled this will finally become a reality. Our residents can now look forward to a waterfront that will become fully public, fully accessible, and fully open for all to enjoy. I am beyond grateful to Governor Murphy and his staff, and New York Waterway for working with us to come to this deal that will dramatically improve Hoboken’s waterfront for generations to come. And, I thank the thousands of residents who have voiced support for our efforts, which helped make this day possible.”

“I thank the Murphy Administration for helping to mediate this long-standing dispute over the Union Dry Dock property,” said Armand Pohan, President and CEO of New York Waterway. “Hoboken and New York Waterway are too important to each other to remain at odds. It is time for all of us to resolve our issues and move forward.”

“Congratulations to Governor Murphy, Mayor Bhalla and most of all, the residents of Hoboken on this historic accomplishment,” said State Senator Brian Stack. “I look forward to continuing to work with you as we move to the next phase of developing a public park for everyone to enjoy.”

“This is a win for open space and the protection of the Hoboken Waterfront,” said Taylor McFarland, Acting Director, Sierra Club New Jersey Chapter. “Union Dry Dock was the last piece of the puzzle to create a continuous greenway along the waterfront and allow people to enjoy the Hudson River walkway. Acquiring open space in urban areas is critical because many people living in Hoboken don’t have access to parks or even backyards. Acquiring this land for a public park will help connect urban areas and provide a place for children and adults to enjoy nature. It will also help with resiliency.”

“What an amazing day for Hoboken! Thank you to Mayor Bhalla, Fund for a Better Waterfront, and all involved who persevered to protect the waterfront,” said 2nd Ward City Councilwoman Tiffanie Fisher. “And especially the Hoboken community who never stopped advocating.  Your voices were instrumental in making this historic day happen.”  The acquisition of the Union Dry Dock property will allow Hoboken to complete the connection of a contiguous, public waterfront with a public park. The property is currently the only portion of Hoboken’s waterfront that is not publicly accessible.

The Bhalla administration and New York Waterway are collaboratively preparing a Memorandum of Understanding (MOU) of the City’s acquisition of the Union Dry Dock property. After the adoption of the MOU, the City and New York Waterway will formalize the terms agreed to by the parties, which will include acquisition costs of approximately $14.5 million from Hoboken’s Open Space Trust Fund at no impact to the municipal budget, as well as an additional $4 million, which the City will bond for.

As a part of the agreement, upon the City’s acquisition of the land the City would temporarily lease back the Union Dry Dock property to New York Waterway for a designated period of time, until the permanent ferry station in Weehawken is complete. During that time, the Bhalla Administration proposes to initiate a thorough public process to determine the permanent design of the park.

Previously, Hoboken appraised the Union Dry Dock property at $13.1 million, while New York Waterway appraised the property at $24 million. The agreement between the parties will end all eminent domain proceedings and potential litigation, which may have subjected the City to several million dollars in additional costs as determined by a jury during eminent domain proceedings, and could have taken several years to complete.

The Memorandum of Understanding and purchase agreement between the City and New York Waterway is subject to approval of the Hoboken City Council at the July 7 City Council meeting.