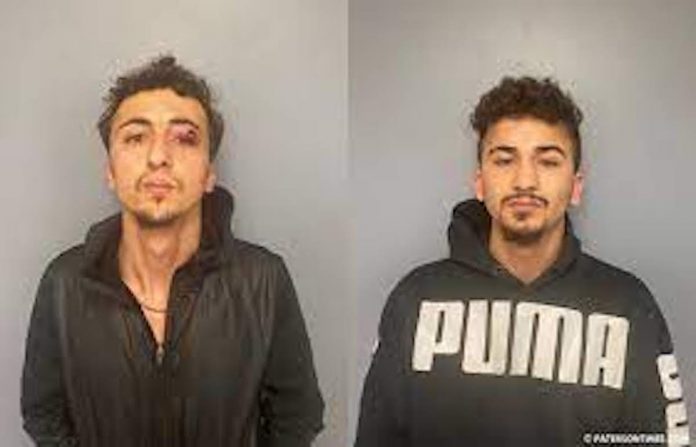 ARRESTS MADE IN CONNECTION WITH APRIL 18 STABBING INVESTIGATION IN PATERSON

On April 18, 2021, at approximately 11:55 p.m., members of the Paterson Police Department responded to the area of Paxton Street and 6th Avenue in Paterson, New Jersey after receiving a report of a motor vehicle accident. Upon arrival, members of the Paterson Police Department observed a white Ford Mustang that had crashed into a nearby house. Maisara Mousa was identified as the driver of the vehicle. The residents of the home were not injured. While investigating the motor vehicle crash, officers were approached by two victims, a 20-year-old male Paterson resident who had been stabbed several times, and a 20-year-old male Paterson resident who had been struck in the head with a tire iron. The victims reported that they were assaulted by two individuals. After the incident, the suspects fled in the Ford Mustang, which subsequently crashed. Both victims were transported to St. Josephs University Medical Center in Paterson, New Jersey for treatment of non-life-threatening injuries.

Based on the investigation, detectives identified Maisara Mousa and Amer Mousa as the actors. Maisara Mousa was detained at the scene and placed under arrest. Amer Mousa, who fled the scene after the crash, was located at Saint Joseph’s University Medical Center and transported to the Paterson Police Department for further investigation and subsequently arrested on April 19, 2021, at approximately 7:17 a.m.

The State intends to file a motion for pretrial detention for Maisara Mousa that will be heard by a Superior Court Judge. Amer Mousa will be seen at Central Judicial Processing Court (CJP) on April 20, 2021 at 1:30 and will be released on conditions. Amer Mousa’s charges have been referred to the Passaic County Grand Jury.

The Passaic County Prosecutor’s Office asks anyone with additional information about this incident to contact us on our tips line at 1-877-370-PCPO or tips@passaiccountynj.org or contact the Paterson Police Major Crimes Division at 973-321-1120.