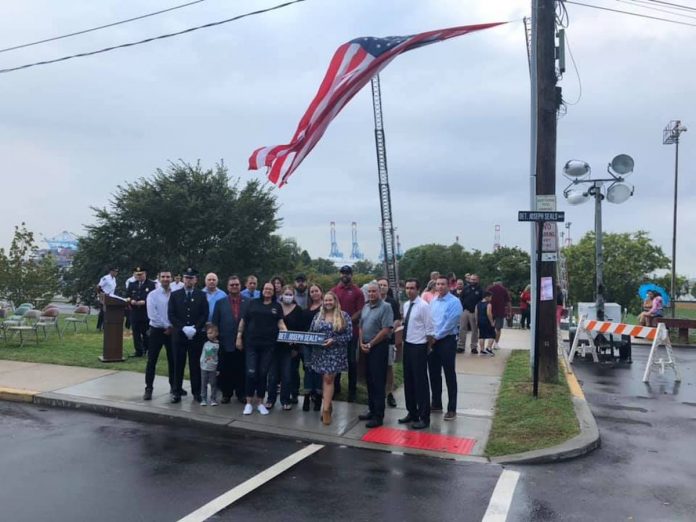 The City of Bayonne and the Tunnel to Towers Foundation held a moving tribute to honor the late Detective Joseph P. Seals at a special event at DiDomenico-16th Street Park on Friday, September 17.  The event featured a ceremony, a concert, and food trucks.

Detective Seals, a Jersey City police officer and a former Bayonne resident, was killed in the line of duty in Jersey City in 2019 after encountering two subjects who were linked to a homicide.  Mayor Davis thanked everyone who came out for the event which paid tribute to Detective Seals.  The Tunnel to Towers Foundation paid his family’s mortgage following his death in 2019.  The Mayor stated, “Detective Seals gave his life after eighteen years of outstanding service in law enforcement.” 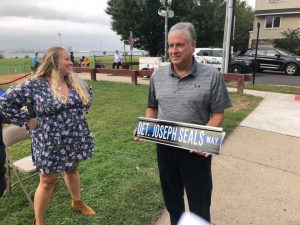 During the 5:00 ceremony on Friday, the access road that leads from the foot of West 16th Street to the lower level of the was renamed Detective Joseph P. Seals Way.  An engraved granite bench set along the road was also dedicated to Detective Seals.   The bench is situated past the DiDomenico City Pool, across from the basketball courts that are located on the way down to the lower level of the park. 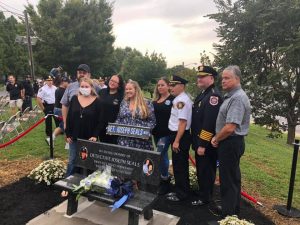 At 6:00 p.m a free concert took place that featured The Beginnings, a Chicago tribute band.  The concert was held at the amphitheater stage on the lower level of the park where the Summer Sounds concert series takes place each summer.

T-shirts were on sale to benefit the Tunnel to Towers Foundation.  The Foundation honors first responders, veterans, and their families for the sacrifice of firefighter Stephen Siller who died while trying to save lives at the World Trade Center on September 11, 2001.  The Tunnel to Towers Foundation pays the mortgages of families of first responders who have died in the line of duty.  The Foundation also provides adaptive housing to disabled veterans and mortgage-free homes to Gold Star families.  Local sponsors also made donations to support the event.

Food was available from a variety of food trucks.