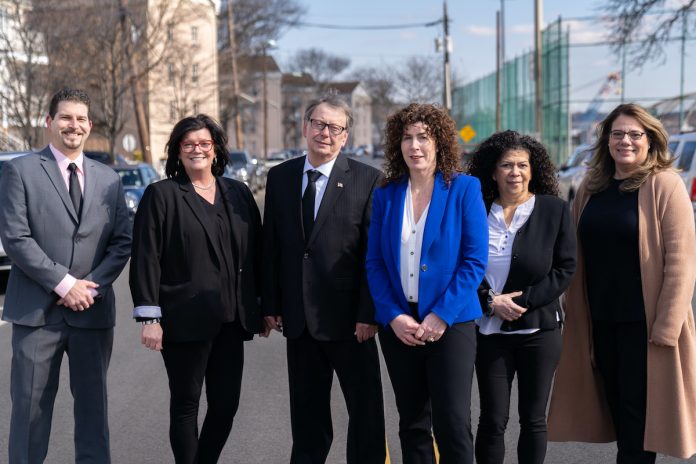 “Today I’m proud to announce three motivated and dedicated members of our community as my running mates for First, Second, and Third Ward Council: Julie Sanchez Lynch, George J, Vinc, and Maria Valado,” said Council President and Mayoral Candidate Sharon Ashe-Nadrowski. “Julie, George, and Maria come from different backgrounds, but all have a proven track record of stepping up and helping those in need. Their well-rounded set of skills is exactly what our City government needs to get back on track.”

Julie Sanchez Lynch is a local small business owner, lifelong Bayonne resident, and an outspoken advocate for children and veterans. She moved from Manhattan when she was five years old, and attended Mary J. Donohoe School and Bayonne High School. She raised her two daughters in Bayonne and is now the proud grandmother of four beautiful grandchildren. Prior to opening a business of her own, Julie maintained a 25-year career in Human Resources. During that time, she specialized in training personnel and worked to ensure that employees were equipped with the resources and support they needed to succeed in the workplace. In 2018 she opened “Arctic Cryotherapy” in Bayonne which specializes in alternative methods to health and wellness. Outside of her professional life, Julie continues to give back to the community volunteering on the Bayonne Hometown Fair Committee.

Inspired by her father’s service in the United States Navy during World War II, Julie is a passionate advocate for military veterans. She partnered with the Veterans Administration to help secure employment and create resumes for servicemen and women returning home from active service. While assisting veterans, she also worked to help some of the most vulnerable members of society on the Child Assault Prevention Task Force for Governor Florio and the Division of Child Services.

“Sharon has the back of every taxpayer and resident of Bayonne – I’m proud to join her team,” said Team Nadrowski First Ward Council candidate Julie Sanchez Lynch. “I’m running for Council because First Ward residents deserve a representative who’s not afraid to answer their questions and be their voice.”

George J. Vinc is a lifelong resident of Bayonne, real estate professional, proud father and dedicated husband. Raised by a single mother, George and his brother witnessed the struggle of living paycheck to paycheck firsthand; learning quickly that life isn’t always fair. Due to financial hardship, George and his family moved quite often. When he graduated from Washington Elementary School it was the sixth grammar school that he attended. High School was a reunion of sorts, making the transition from childhood to adulthood a little easier. George went on to graduate from Bayonne High School, and thereafter, attended New Jersey City University.

During college, George studied Computer Science and sold real estate on the side. After college he began a successful 15-year career in financial services. He held management and development positions with Sovereign Bank, Citigroup, and Bank of America. While at Bank of America, George managed a portfolio of $82 million for 300 clients in a territory with 40 employees. A point of personal pride for him was his work with the Project Hospitality Women’s Shelter and Food Bank of New York City where he helped residents learn the basics of financial independence and provided free tax preparation services for low-income families.

After success in the financial sector, George returned to his true passion, real estate, where he currently manages Century 21 Viewpoint in Bayonne. Under his guidance, the office achieved the “C21 Commercial Network” designation and formed a relationship with Neighborhood Assistance Corporation of America (NACA). This relationship focuses on making the dream of homeownership a reality for thousands of working people by counseling them honestly and effectively.

Outside of work, George has been a member of the Bayonne Sicilian Club for a decade, and previously served as an officer of the organization. By far, George’s proudest achievement is his family. As a father and husband, he looks forward to the years ahead, raising his children in the same community he also grew up in. He’s now running for City Council to ensure that Bayonne maintains the small town feel that he remembers as a child.

“Being honest, direct, and loyal is what Bayonne expects from its leadership – Sharon is just that,” said Team Nadrowski Second Ward Council Candidate George J. Vinc. “While our City will continue to grow, Sharon and I share a vision of Bayonne that preserves the small town feel we all love for generations to come.”

Maria Valado was born and raised in Bayonne and is currently the President of the Bayonne Board of Education. Married to her husband, Juan, they are the proud parents of two children, Jordi and Emmily. Growing up in Bayonne, Maria attended Midtown School, Vroom Learning Center, and Holy Family Academy. After High School, Maria continued her studies, ultimately earning a Master’s Degree in Educational Leadership from Concordia University.

Education is Maria’s passion. An educator by trade, Maria has been a teacher in the Newark public school system for over 25 years. In addition to her work in the classroom, Maria was first elected to the Bayonne Board of Education in 2017, and was re-elected in 2020. Elected on a platform to get the Bayonne School District’s leadership and priorities in order, she and her Board colleagues quickly went to work. Her tenure on the Board of Education includes notable accomplishments, including the hire of a new Superintendent of Schools, the hire of a new School Business Administrator, and the purchase of all new reading, math, and science textbooks.

Maria has first-hand experience in bringing change and a renewed sense of leadership to a large public organization like the City of Bayonne. While not always an easy task, she knows Bayonne and the thousands of people who proudly call it home are worth the time, effort, and dedication.

“Sharon continually pushes ahead, seeking out what we can do better as a City. It’s what makes her a great leader, and what makes me proud to be a member of her team,” said Team Nadrowski Third Ward Council Candidate Maria Valado. “I believe running for office and serving as an elected official isn’t supposed to be easy. It’s about asking hard questions, making hard decisions, and being accountable. Above all, it’s about doing the right thing because our community is worth it.”