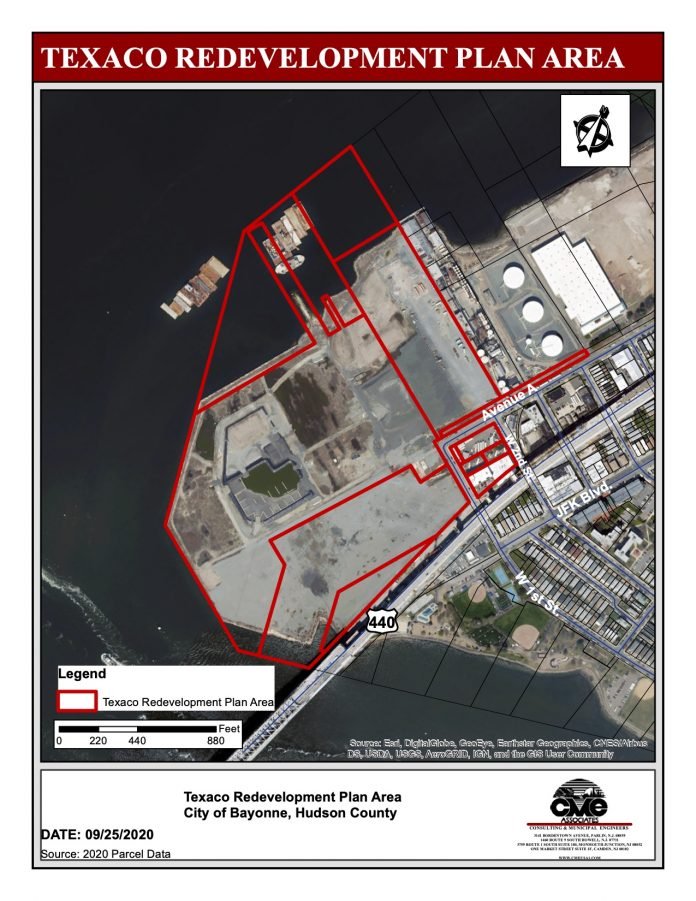 More than 100 years after the Peninsula City was home to the first independent film studio in the country, Bayonne has moved a step closer to bringing film production back to the city.  In doing so, the city will develop the former Texaco property on the southwestern side of the municipality along Newark Bay at the base of the Bayonne Bridge.

Bayonne Mayor Jimmy Davis and the City Council have introduced an ordinance amending the redevelopment plan for the property, which has remained vacant since being leveled years ago.  The ordinance changes the zoning standards for the site to allow for construction of a film studio and production facilities as its primary use.

The property in question is made up of 13 separate lots encompassing about 70 acres which housed the old Texaco refinery since the early 1900s until its closure in the 1980s.  Texaco merged with Chevron in 2001.

After several failed development attempts by numerous city administrations, Bayonne ended the Kaplan Companies’ designation as redeveloper for the site in 2018.  Chevron, the current owner, issued a Request For Proposals for development of the property this past spring.

Chevron narrowed the selection down to one potential developer.  At the request of the prospective developer and Chevron, Bayonne is slated to amend the redevelopment plan to allow for a movie studio on the site.

Mayor Davis stated, “We are excited by the prospect of having a studio make Bayonne its home.  The studio is also intended to house workshops, offices, and sound stages while providing the public with a waterfront walkway and open space.”

City Council President Sharon Ashe-Nadrowski added, “This type of development brings additional balance to Bayonne’s ongoing redevelopment.  The creation of the studio will add to our continued economic development with the creation of jobs and substantial investment.”

Bayonne’s Planning Board is scheduled to hold a public hearing on the proposed ordinance change next month, with the City Council taking a vote in October as well.

Founded in 1907, Centaur was the country’s first independent film company, and was housed in Bayonne.  Centaur’s west coast division, Nestor, became the first motion picture company in Hollywood in 1911.