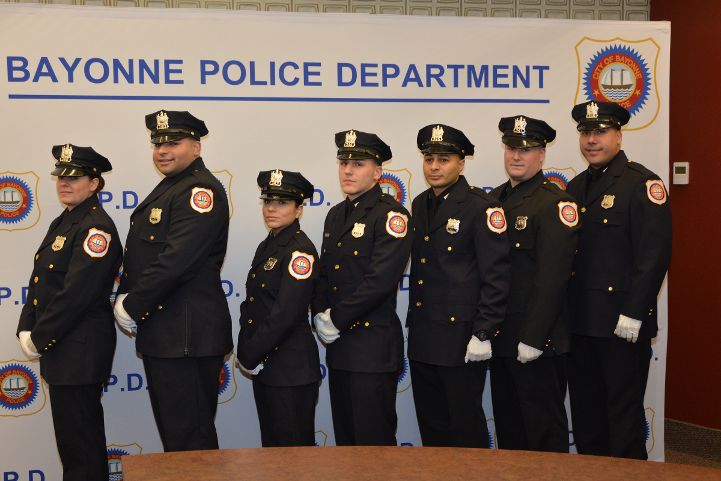 A ceremony was held last Thursday at Bayonne City Hall to promote 18 members of the Police Department while swearing-in new members to the force.  The city issued the following press release:

Bayonne Police Department Holds Ceremony for New and Promoted Officers
On February 6, the Bayonne Police Department held a ceremony in the
Council Chambers for seven new police officers and eighteen newly promoted
officers. The promoted officers include five new captains, six new lieutenants, and
seven new sergeants. The new officers were hired and existing officers were
promoted, due to retirements in the Police Department.
The new police officers are Andrea Urbanski, Modesto Ramirez, Esperanza
Penaranda. Michael Troglio, Sameh Hanna, Victor Munoz, and Isaias Mercado.
The new captains are James Donovan, Carlos Betancourth, Joseph Spiers,
Eric Amato, and Timothy Wilgus.
The new lieutenants are Tomasz Malinowski, Christopher Foster, Andrew
Quinn, Lauren Brattole, Thomas Hojnacki, and Kevin Lapinski.
The new sergeants are Anthony Larwa, Joseph Kowalski, Doaa Salama,
Charles Nadrowski, Kenneth Maak, Matthew May, and Matthew McGillis.
The entrance procession was led by the Bayonne Police Department Honor
Guard and the Bayonne Police Pipes and Drums. Police Officer Karol Kruczyk led
the Pledge of Allegiance. Father John Fencik offered the invocation and the
benediction. The Police Pipes and Drums played a rendition of Amazing Grace.
Deputy Police Chief Walter Rogers recited the police biographies. City Clerk
Madelene Medina administered the oaths of office.
Mayor Jimmy Davis, City Council Members, Public Safety Director Robert
Kubert, and Police Chief Robert Geisler offered remarks.
Mayor Davis said to the new officers that having a police career is
“something you must cherish.” He congratulated the families of the police recruits
and the newly promoted officers.
City Council President Sharon Ashe-Nadrowski told the new officers, “You
have joined one of the finest police departments around.” She congratulated the
promotees for advancement and their years of service.
​
Concerning the promoted officers, Director Kubert said that he had
“watched them all develop,” and that he “considered it an honor” to work with
them. He suggested to the new officers that they show take after their newly
promoted colleagues. “This is who you want to be,” Kubert said. “Try and follow
them.”
Addressing the new police officers, Chief Geisler described the position of
police officer as “the best job in the world.” He said that they would be “held to a
higher standard.” He advised them to “treat others as you would want to be
treated.” He congratulated the newly promoted officers, and thanked Mayor Davis
and the City Council for recognizing the need for promotions.