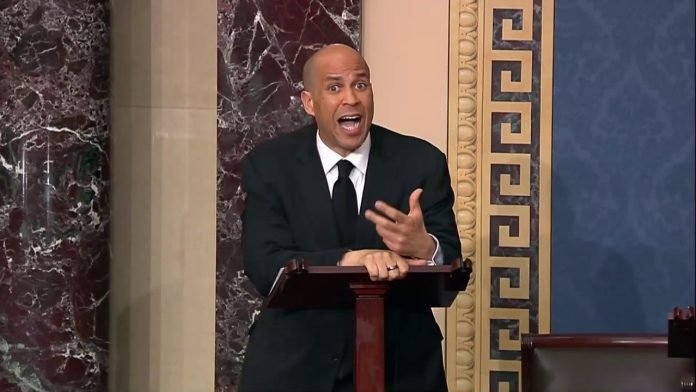 Booker: “It is long past time to remove from our nation’s Capitol the statues that pay homage to those who took up arms against the United States and killed their fellow Americans in order to preserve the vile institution of slavery.

WASHINGTON, D.C. – U.S. Senator Cory Booker (D-NJ) took to the Senate floor today in an attempt to use a procedural maneuver to pass legislation removing Confederate statues from the United States Capitol but was blocked by Republican objections.

Booker is the co-author of the Confederate Monument Removal Act, which will remove all statues of people who voluntarily served the Confederate States of America from the National Statuary Hall Collection within 120 days of passage. Booker attempted to use a method for expediting consideration and passage of legislation known as “unanimous consent” to advance the measure, but was blocked after Republican Senator Roy Blunt objected.

While speaking in support of removing Confederate statues from the Capitol, Booker said the National Statuary Hall Collection is intended to acknowledge and “honor the highest ideals this country aspires to meet” and not “those who took up arms against the United States.” Booker also spoke on the importance of our nation acknowledging the deep-rooted, systematic racism that too many Black Americans are continuously facing in this country.

“We cannot separate these things from one another— the glorification of traitors who fought to uphold slavery, the disenfranchisement of Black Americans, and the horrific violence and systemic use of lynching as a tool of racial terror– because they are not separate from one another, they are connected.”

“We have a long way to go in this country to address the deeply rooted, systemic racism that continues to corrode the heart of our democracy–from fixing our broken criminal justice system to ensuring equal access to the ballot. It is long past time to remove from our nation’s capitol the statues that pay homage to those who took up arms against the United States and killed their fellow Americans in order to preserve the vile institution of slavery.”

“Individuals who committed treason against the United States of America and led our nation into its most painful and bloody war to preserve the institution of slavery are not patriots and should not be afforded such a rare honor in this sacred space. The continued presence of these statues in the halls of Congress is an affront not just to Black Americans, but to the very ideals we as a nation proclaim, that we are a place of liberty and justice for all.”