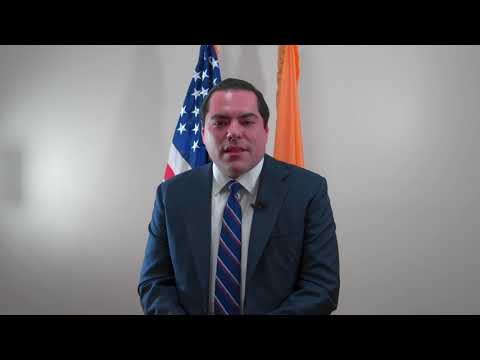 The battle for Mayor of West New York is fully underway.  This afternoon, Public Affairs Commissioner Cosmo Cirillo, born and raised in town, announced in an email to local media, he intends to run for Mayor in the upcoming 2023 municipal election so West New York can continue to move forward.
With retiring Congressman Albio Sires, a former Mayor himself, expected to seek the position once again, and with Legislative redistricting taking effect next year, current Mayor Gabriel Rodriguez is rumored to be a potential Assembly candidate when the changes go into effect.
Commissioner Cirillo indicates in his announcement below, that Mayor Rodriguez has not put in the “hard work, effort and time’ to move the town forward.
See Cosmo Cirillo’s statement below:

For the past eight years, I’ve had the honor of serving as your Commissioner of Public Affairs. As someone who has grown up here, went to school here, and spent my entire life in town, I am extremely proud of the work I have been able to accomplish such as expanding and improving recreational activities for our residents, starting a brand new tutoring program at the library, maintaining strong rent control regulations, having my office assist a countless amount of residents with rental assistance during the pandemic and feeding thousands of families every summer through our Recreation Food Program.

I am also happy to have assisted in the implementation of upgraded parks and fields, a plan for three brand new and much needed parking decks throughout town (the first of which is scheduled for completion within the next month) and other improvements around West New York.

When our current team of Commissioners ran four years ago we ran on a slogan of “new beginnings” for our town, yet here we are at a critical crossroads where we can choose to move backwards or stand together and move West New York in a positive and promising direction forward.

I believe actions speak louder than words, West New York needs and deserves a Mayor that is willing to put in the hard work, effort and time, that will be available and accessible to listen to and address the concerns of our community and understand the issues our residents face on a daily basis and also work day and night to be a true servant for our community.

It is for these reasons, after careful consideration and listening to the words of encouragement of my family and supporters, that I am officially declaring my candidacy to be the next Mayor of the Town of West New York. Over the coming weeks, I look forward to introducing my dynamic team that share these same values and who I believe represent the very best of West New York.

In closing, from the bottom of my heart, I want to thank all of you that have supported me in the past and continue to support me. For those of you I have not had the privilege of meeting, I look forward to meeting you on the campaign trail and working tirelessly to earn your vote and working even harder to keep your trust once elected. It is my hope that you will join my team and I on this exciting journey. By working together we can and will move WEST NEW YORK FORWARD. Wishing you and your families a very happy and healthy holiday season. Thank you!