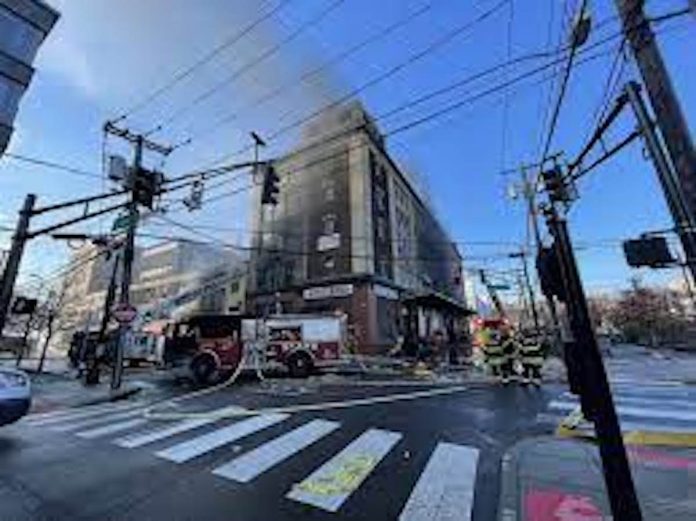 The Hudson County Prosecutor’s Office has revealed that a preliminary investigation by its Regional Arson Task Force and the Bureau of Alcohol, Tobacco, Firearms and Explosives has determined the origin of a fatal fire at 38 Jackson Street in Hoboken on December 20, 2021 to be a first floor business.

In addition, the investigation revealed the blaze began in the rear of the building at Glass & Vapor House LLC with the cause being ruled an accident.

Hudson County Prosecutor Esther Suarez says investigators believe the presence of flammable material within that business likely contributed to the fire.  At approximately 12:20 a.m. on Monday, December 20, an on-duty Hoboken Police Officer heard a loud explosion in the area of Jackson Street.  First responders arriving at the scene found an active fire in a warehouse located at 38 Jackson Street. The Hoboken Fire Department responded and was assisted in extinguishing the fire by the Jersey City Fire Department and North Hudson Regional Fire and Rescue.

Several surrounding buildings sustained fire and water damage. During fire suppression activities, firefighters found two fire victims in the warehouse. Rose Marie Vos, 60, and a 61-year-old individual were both pronounced dead at the scene. The release of the second victim’s name is still pending notification of next of kin.  The cause and manner of death are pending the findings of the Regional Medical Examiner’s Office.

The Regional Arson Task Force continues to investigate this incident with assistance from the Bureau of Alcohol, Tobacco, Firearms and Explosives, the New Jersey State Fire Marshal, the Hoboken Fire Department, and Hoboken Police Department.