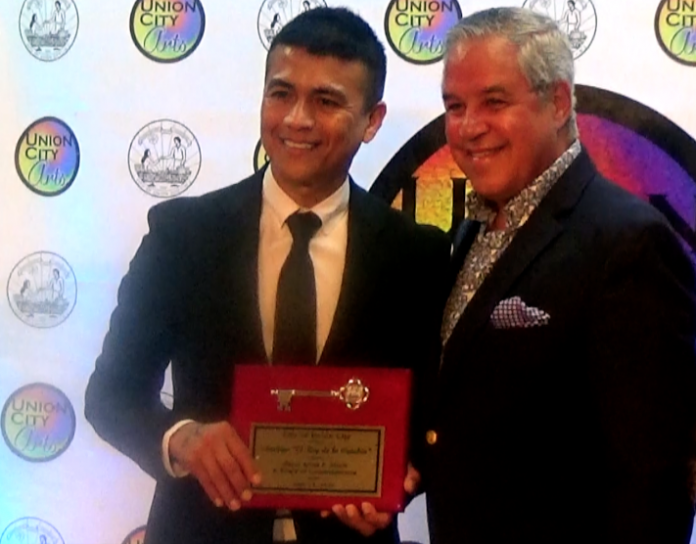 The artist is currently on his United States tour and playing next week at S.O.B.’s in New York City.   But he took the time to stop in Union City to meet his fans and they were thrilled.

“I am very happy to be here… accompanied at the event by the people who came and their love, to also be a part of this beautiful ceremony. For real, Thank you very much; I’m very, very happy,” says Américo.

It meant so much to the fans for Américo to be in Union City and he was equally happy to perform a personal set of his songs for them.

“He’s a wonderful, wonderful vocalist, probably one of the most renowned vocalists in all of Chile,” says Public Affairs Commissioner, Lucio Fernandez.

“His music is the type of music that the kids our age or teenagers don’t really hear ‘cause it’s Cumbia, you know — it’s something more tropical,” longtime fan Angel Guevara says. “And I don’t know, my parents always brought me up with the music — so that’s why I’m here today.”

She loves and supports his music… and definitely has company.

“I’ve been a fan for a very long time; my mom, my sisters — and from the beginning. He was very known in Chile and now he’s become more of an international star,” says Sarah Lillo, adding that despite all of Américo’s fame — he’s a very humble person.

“Imagine coming from so far and being so greatly received here in Union City… for real it’s beautiful,” the artist says.

And the city welcomed Américo with open arms and knew all the words to his songs too!
“The power of the music and the love of the people… is incredible and makes me feel like I am not far from home,” he says.

“A lot of people come and don’t really understand behind the stories of the artists and I’m really big on that. Been wanting to always meet him, and he was an excellent person and I caught him outside actually,” says Guevara.

It made perfect sense to honor the star and make him part of the Union City family.

“He accepted the invitation to come and do this impromptu, intimate concert and be awarded a key to the city,” Fernandez says.

Having Americo here brings it close to home for Sarah.

“He’s from the same city as my mother in Chile — and not many people are from that city,” says Lillo. “It’s a big deal for us. It’s like someone actually came out and made it from our city in Chile.”

Without a doubt, the artist left a lasting impression on his Union City fans.

“It feels like I never left home… I’ve been very well received and moreover awarded and happy,” Américo says.