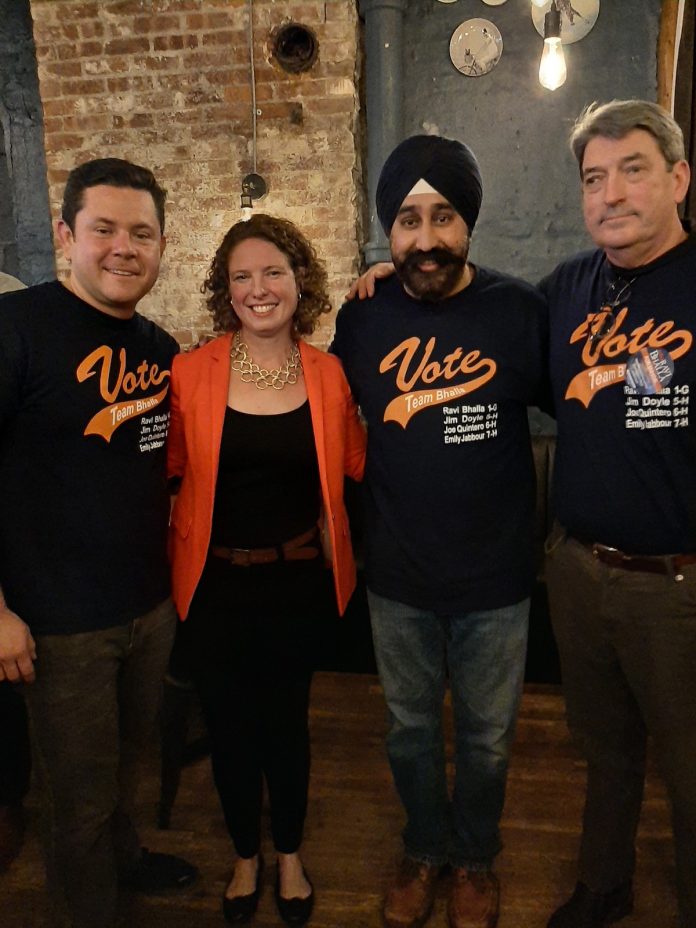 Mayor Ravi Bhalla had nothing to worry about regarding his bid for re-election.  After all, the Hoboken Mayor ran unopposed.  But that doesn’t mean he wasn’t worried about his ticket of At Large Council candidates, featuring incumbents Emily Jabbour, Jim Doyle and newcomer Joe Quintero.  What’s the old saying?  “You just never know in politics.”

Well, there was no need to worry.  A clean sweep by his slate by a comfortable margin of more than two-to-one.  At City Bistro on election night, Mayor Bhalla said it “was a mandate by voters. to continue doing the work they’ve been doing”

“We didn’t have to sell people on campaign promises,” Jabbour concluded. “We’ve been doing the work” and voters saw that.

Councilwoman Jabbour led the field of ten candidates for the three At Large seats, followed by Councilman Doyle and Quintero.  Jabbour may have said it best during the slate’s victory speeches, when she stated, “We didn’t have to sell people on campaign promises. We’ve been doing the work” and the voters recognized that.

Among those joining in the celebration were Councilmen Phil Cohen and Michael Russo, as well as outgoing Councilwoman Vanessa Falco and Hudson County Commissioner Anthony Romano.

The Independently Together slate of Cheryl Fallick, Sheila Brennan and Paul Presinzano, which had received the endorsements of Councilwomen Jennifer Giattino and Tiffanie Fisher, placed a distant fourth, fifth and sixth.  The remaining four independent candidates were not a factor.