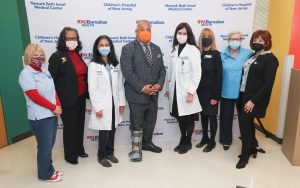 “Colorectal cancer is a disease that affects hundreds of thousands of Americans each year, and it’s something that hits incredibly close to home for me,” said Congressman Payne. “One of my top priorities is addressing the health care disparities that lead to colorectal cancer being such a devastating disease. That’s why I joined healthcare leaders today to ask Congress to pass this crucial legislation that would improve access to critically important cancer screenings, especially in communities of color where cost is too often a barrier to receiving the proper care.”

Congressman Payne’s new legislation builds on success he has already achieved on the issue. He sponsored the “Removing Barriers to Colorectal Cancer Screening Act” so Medicare beneficiaries could get polyp, or cancerous growth, removals covered during routine colorectal cancer screenings. The bill was signed into law in 2019, and has already made a major difference. Congressman Payne has also been a strong supporter of the Patient Protection Act, which recently became law and saves a family of four earning $40,000 nearly $1,600 every year, and a 64-year-old earning $57,420 saves more than $8,700 every year. He co-sponsors the Medicare for All proposal, because health care should be a right, not a privilege.

“While Republicans have spent the past decade trying to destroy the Affordable Care Act, I’ve been focused on expanding access to care by passing new legislation focused on cancer and diabetes,” said Congressman Payne. “I’m proud that I was able to join my House colleagues recently to vote to cap the cost of insulin at $35 per month, another measure that would address these kinds of long standing health disparities, and I will always fight for people to get access to the healthcare they need.”

“Health disparities in our community is an issue that is near and dear to my heart,” said Dr. Garcia. “Our team at Newark Beth Israel is dedicated to providing the highest and most compassionate level of care, and our task force is committed to continuing to expand healthcare access and reducing the racial and economic disparities to receiving critical treatments. We are so grateful for Congressman Payne’s continued advocacy and pursuit of legislation that expands access to care.”