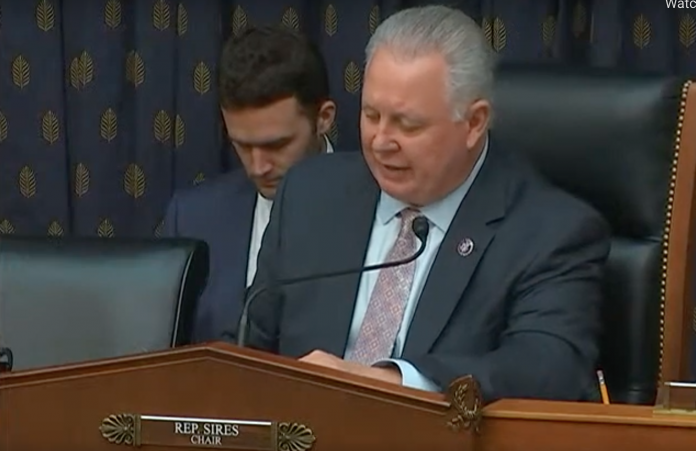 Earlier today, Congressman Albio Sires (D – District 8) chaired a hearing on the historic protests the Cuban people have held and the crackdown they have faced on free expression.  Cubans demanding freedom and democracy have been met with violence and arrests by the Castro/Diaz-Canel regime.  Rep. Debbie Wasserman Schultz, Rep. Mario Diaz-Balart and I introduced a resolution last week expressing solidarity with the Cuban people.

(Washington, D.C.) –  Today, Congressman Albio Sires (D-NJ), Chairman of the House Subcommittee on the Western Hemisphere, joined Representatives Debbie Wasserman Schultz (D-FL) and Mario Diaz-Balart (R-FL), in addition to Chairman of the Senate Foreign Relations Committee Bob Menendez (D-NJ), Senate Foreign Relations Committee Ranking Member Jim Risch (R-ID), Chairman of the Senate Subcommittee on the Western Hemisphere Tim Kaine (D-VA), Ranking Member of the Senate Subcommittee on the Western Hemisphere, and U.S. Senate Majority Whip Dick Durbin (D-IL) in unveiling a bicameral, bipartisan resolution condemning the Cuban government’s violent response to the thousands of Cuban citizens who have taken to the streets to peacefully call for respect for basic human rights and the end of the dictatorship in Cuba.

Following days of massive protests in cities and towns across Cuba, the resolution comes as independent Cuban civil society groups report hundreds of peaceful protesters have been arrested, detained, or are missing, while the regime has continued to rely on widespread internet shutdowns and illegal searches of the homes of activists in an effort to quash the burgeoning pro-democracy movement.

“The Cuban people are tired. They’ve had enough of a failed system that only delivers repression and suffering; they are clamoring for freedom and democracy.” said Rep. Sires. “I’m inspired by the examples of courage we are witnessing throughout Cuba, especially among young people, and I’m proud to stand with my colleagues on a bipartisan basis against this brutal dictatorship and in solidarity with the Cuban people.”

“Risking everything, thousands of Cubans are bravely confronting their brutal, authoritarian government. They desperately need the world’s support to lift up their demands for freedom. One of the most powerful messages America can send right now is offering to put our partisan differences aside, and stand firmly, together, behind this historic call for true self-determination. The Cuban people are courageous and strong, but their plea for free speech, assembly, internet access, and a chance to choose their own leaders – cannot be met with silence,” said Rep. Wasserman Schultz. “I am proud to stand by them and the entire Cuban diaspora in this critical moment by introducing this bipartisan resolution, which says loudly and clearly: the American people stand in solidarity with the protestors in Havana and beyond, who are standing up to this oppressive and tyrannical Cuban dictatorship.”

“I greatly appreciate my dear friends from the House and Senate, from both sides of the aisle, who came together with a unified voice to express solidarity with the Cuban people, and to condemn the regime’s brutality against courageous pro-democracy protesters,” said Rep. Diaz-Balart. “The Cuban people are risking everything to demand respect for their God-given liberties. We stand with them, and they will prevail.”

“What we are seeing in Cuba is unprecedented. There has never been a social justice and pro-democracy movement of this size across so many cities and towns in the island, and it speaks to the Cuban people’s determination to liberate themselves from the iron fist of this regime,” said Senator Menendez. “As the tyrants in Havana wither, their reliance on violence and internet blackouts is emblematic of the ends to which they will go to intimidate and obstruct the growing chorus of voices calling for political reforms in Cuba. Today, the United States Congress is united in its unflinching support for Cubans’ fundamental human and social rights. We are speaking with one voice in honor and admiration of the work being carried on by the brave freedom fighters in Cuba, and we are making a solemn promise not to ignore the suffering and subjugation of the Cuban people as they inch closer to realizing a future of prosperity and freedom.”

“The U.S. Senate must send a strong bipartisan message that we stand united against the communist regime in Cuba, which is violently repressing peaceful protests and censoring the voices of the Cuban people,” said Senator Rubio. “The Biden Administration must act now to provide unrestricted access to the internet for the Cuban people, and begin rallying the international community on their behalf. The people of Cuba are no longer afraid and the world must answer the call.”

“I’m proud to introduce this resolution to express solidarity with the Cuban people who are speaking out against decades of oppression,” said Senator Kaine. “With this resolution, we are sending a strong bipartisan message that we stand with the Cuban people exercising their right to demand freedom and reform. They should be able to voice their opinions peacefully. As Chairman of the Western Hemisphere subcommittee, I will continue working to promote human rights and freedom in the region.”

“We are seeing decades of deep Cuban frustration over inept, corrupt, and cruel governance boiling over. While I have long argued for a change in the failed U.S. policy toward Cuba, the Cuban people know the real source of their island’s lost potential rests squarely with the ruling dictatorship,” said Durbin. “On this 9th anniversary of Cuban democracy activist Oswaldo Payá’s suspicious death, I stand with the Cuban people in their peaceful demand for a brighter future.”

You can read the resolution here