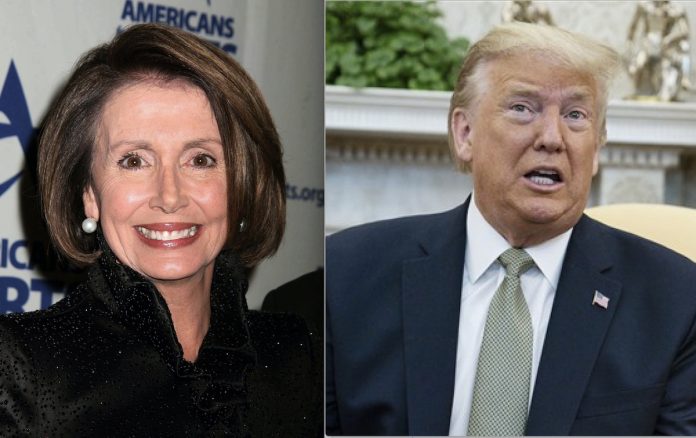 The United States House of Representatives on Saturday passed a $25 billion, postal services bill, largely along party lines, with little Republican support, against the wishes of President Donald Trump.  Dubbed the “Delivering for America” measure, the bill, sponsored by New York Congresswoman Carolyn Maloney, Chair of the Oversight Committee, is aimed at rolling back the service cuts at the United States Postal Service made since January.

Democrats have maintained such cuts would inhibit Americans’ ability to vote by mail in the November, Presidential General Election.   The measure passed with only 26 Republican House members voting in favor of the move.  The vote tally was 257 to 150.

Due to the coronavirus pandemic, and Governors from across the Union approving vote by mail as the “preferred” method in the upcoming election, it is expected that the percentage of vote of mail ballots will skyrocket in the General Election, which is being viewed as a turning point in our history.

Postal service cutbacks have had a clear affect on postal delivery across America, although Postmaster General Louis DeJoy has announced the cuts and changes are being put on hold until after the election.  Despite House passage, the measure is not expected.to pass the Republican-controlled Senate and have any impact on operations at the USPS.

Senate Majority Leader Mitch McConnell has stated in recent days that the House bill will not even be considered by the Senate.  President Trump has threatened to veto it should it reach his desk.  On Saturday, the President tweeted,

Donald J. Trump
@realDonaldTrump
Representatives of the Post Office have repeatedly stated that they DO NOT NEED MONEY, and will not make changes. This is all another HOAX by the Democrats to give 25 Billion unneeded dollars for political purposes, without talking about the Universal Mail-In Ballot Scam……..that they are trying to pull off in violation of everything that our Country stands for. Vote NO to the Pelosi/ Schumer money wasting HOAX which is taking place now. Then fight the $51 million unasked for Ballots. Only ABSENTEE BALLOTS are acceptable!

On Friday, prior to Saturday’s House vote, Congressman Donald Payne, Jr. (D-District 10) wrote a letter to the Democratic leadership of both the House and Senate.  Details about the letter’s contents are contained in the following press release:

Washington, D.C. — Congressman Donald M. Payne, Jr. sent a letter today to urge House Speaker Nancy Pelosi and Senate Minority Leader Chuck Schumer to “stand firm” in their support of funding for the United States Postal Service.  The U.S. House of Representatives will vote on a bill tomorrow to provide $25 billion to the Postal Service to improve mail delivery and service before the 2020 election.  Rep. Payne, Jr. was a co-leader on the letter with Rep. Ayanna Pressley (D-MA) and it was co-signed by 101 House members of Congress.

“We need the Post Office to guarantee that everything from ballots to Census forms arrive on time,” said Congressman Donald M. Payne, Jr.  “Usually, support for this critical American institution is not a political issue.  Unfortunately, President Trump has decided to try and limit service to improve his re-election chances in November.  Now, the Post Office needs every dime of this money to thrive.  I wanted to write this letter to encourage House and Senate leadership not to negotiate on the final funding figures when it comes to something as important to Americans as mail delivery.”

The letter comes before a crucial vote on the Delivering for America Act.  Along with the funding, the bill (H.R. 8015) would halt post office closures or consolidations, stop the reduction of hours at postal locations, ensure that employees receive overtime pay for overtime hours, and return postal service to the level Americans experienced on January 1, 2020, before the coronavirus public health crisis crippled the nation.

“The United States Postal Service provides essential jobs and services to our communities and is critical to our democracy and our economy,” said Congresswoman Ayanna Pressley. “As the Trump administration and their handpicked Republican accomplices work to undermine and sabotage the USPS, it’s critical that we stand firm in our demand to provide the Postal Service with the resources and support it needs to remain the strong, secure, and reliable public service agency that it is.”

It is the latest action in Rep. Payne, Jr.’s battle to save the Post Office from President Trump’s attempts to defund it.  In the last two weeks, Rep. Payne, Jr. has written or co-signed five letters to House leadership, Postmaster General Louis DeJoy, and others to provide funds for the Postal Service in the next coronavirus bill and improve service to all Americans during this global pandemic.  In addition, he toured three local Post Offices in Newark, Orange and Union to discuss postal issues with local managers and carriers.

The full text of the letter is below.

We write to you with extreme concern regarding the massive delays of mail delivery being reported across the country. If left unabated, this has the potential to negatively impact two cornerstones of our democracy: the decennial Census and the 2020 general election. As you continue to engage in COVID-19 negotiations with the administration, we urge you to stand firm in support of the United States Postal Service and support at least $25 billion in emergency funds to meet the increased demand brought on by this pandemic.  The Postal Service is set to lose over $54 billion over the next 10 years.  These funds would offset the cost-cutting measures that have led to uncertainty in mail delivery. The universal right to the ballot box has been affirmed through a long struggle in courthouses, legislatures, and in communities across the nation. We cannot allow any unravelling, reduction, or suppression of this fundamental right of democracy.

From the start of the COVID-19 pandemic, the United States Postal Service has been the primary method for Americans to complete their Census forms, register to vote and cast their ballots in primary elections. This is why we are so concerned by attempts from Postmaster General Louis DeJoy to weaken the USPS. Since Postmaster General DeJoy took office in June 2020, his changes have required mail to be left in distribution centers if it delays routes and eliminated overtime to complete all mail deliveries. This has directly hampered the ability of citizens to receive the level of service that they have come to expect and deserve from this constitutionally mandated service.

With the general election taking place in just a few months and primary elections underway, it is imperative that millions of Americans can safely rely on the critical infrastructure provided by seamless and timely mail delivery. What is particularly troubling is that there appears to be a deliberate slowdown of mail delivery that has an enormous potential to impact the general election and congressional reapportionment. Any attempt to subvert the right to vote or undercount the Census must be met with swift and decisive resistance.

We respectfully urge you to continue efforts to push for much needed emergency aid and fight back against efforts to undermine the United States Postal Service so the American people can have faith that they will be counted in the Census and their ballots honored in the election.