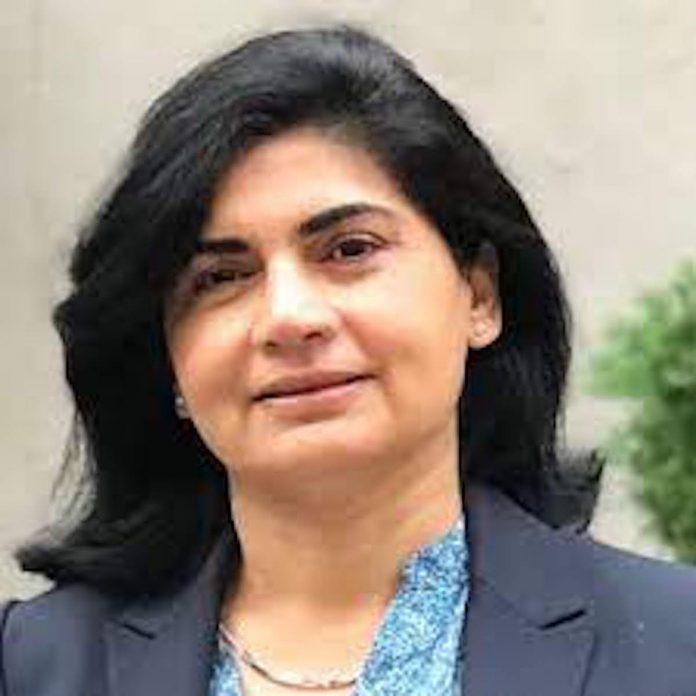 Just a few days after joining the November election ticket of Hoboken Mayor Ravi Bhalla as an At Large Council candidate, Dini Ajmani withdrew her candidacy several weeks ago.  Now it appears the reason for her withdrawal has come to light.

In a press release posted this afternoon by the New Jersey Treasury Department, where Ajmani has worked as Assistant State Treasurer during the Murphy Administration, the state lauded Ajmani’s tenure in Trenton, but said she has accepted a position in the President’s Administration.

(TRENTON) – The NJ Treasury Department announced today that Assistant State Treasurer Dini Ajmani departed from the Treasurer’s Office on September 24, after serving nearly four years in this role, to take on a position in the U.S. Treasury as Deputy Assistant Secretary for Capital Markets.

“Since 2018, Dini Ajmani has been a great asset to the Murphy administration,” said State Treasurer Elizabeth Maher Muoio. “Her strong understanding of the financial markets and macroeconomic issues have proved invaluable as she helped our Treasury team work to reduce healthcare costs and improve quality, restructure the investment of pension assets, and get the State on a path to fully funding the pension system to protect the retirement of hundreds of thousands of public employees. She will be missed and we wish her all the best as she embarks on the next chapter of her career.”

Ajmani assumed the role of Assistant Treasurer in January of 2018. She oversaw Treasury’s divisions of Public Finance, Pension and Benefits, Investments, and Lottery, all of which markedly impact the State’s finances and fiscal health.

“It has been an honor to serve as Assistant Treasurer and work on behalf of the people of New Jersey,” said Ajmani. “I am grateful to Treasurer Muoio for entrusting me with this opportunity, and for her partnership as we overcame many obstacles to put the state on a path to fiscal wellbeing. Our recent credit rating upgrades and full pension payment are testaments to the forward thinking and hard work of the Treasurer’s Office. I am proud of all we have accomplished together.”

Prior to joining the Murphy Administration, Ajmani spent two decades in financial services. She went on to serve as legislative fellow for finance and economic issues for U.S. Senator Cory Booker, and later as a policy advisor for Governor Phil Murphy’s 2017 gubernatorial campaign.