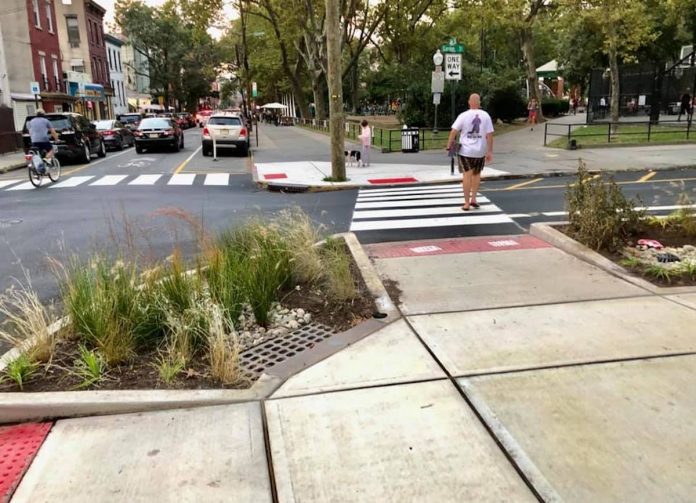 The City of Hoboken was recognized today the Biden Administration as being a national model in terms of traffic safety, Vision Zero efforts.  Hoboken has installed 30 curb extensions, 298 high visibility crosswalks, and more since 2019, as part of its Vision Zero goal to end all traffic-related injuries and deaths by 2030.

Today, Transportation Secretary Pete Buttigieg released a plan to create safer streets nationwide, and cited Hoboken as a national model for eliminating traffic-related deaths over the past four years.

“There are communities that have gotten to that already. And I’m not talking about Oslo, but a place like Hoboken in the U.S. has seen multiple years with zero deaths,” said Secretary Buttigieg, identifying Hoboken’s successful Vision Zero efforts.

“I applaud President Biden and Secretary Buttigieg for laying out a comprehensive plan to create safer streets throughout the country,” said Mayor Ravi S. Bhalla. “As the Secretary stated, Hoboken will continue to serve as a national model, by prioritizing the safety of pedestrians and implementing infrastructure improvements that protect our most vulnerable residents. I thank the Biden administration for recognizing our efforts and for making Vision Zero a national priority.

While we’ve accomplished a great deal over the past four years, including no traffic-related deaths, we still have more to do. I look forward to working with our community to build on our successes as we continue to work toward our ambitious goal of eliminating all traffic-related deaths and injuries by 2030. Thank you to our Vision Zero Task Force, Transportation Director Ryan Sharp, and his transportation team for leading our efforts to make Hoboken’s streets safer for all pedestrians and modes of transportation.”

Hoboken is recognized nationally as one of the most walkable cities in the United States and a City where people can walk, bike, and drive safely. It is one of the only cities nationwide to achieve zero traffic-related deaths for the past four consecutive years.

Since 2019, the City has installed 17 miles of bike lanes, 298 high visibility crosswalks, and 30 curb extensions, among other Vision Zero infrastructure improvements.

This year, the City will launch an open public process for the redesign of Sinatra Drive that will include Vision Zero improvements, such as safer pedestrian crossings, a physically separated bikeway, and ADA-compliant curb ramps, in addition to green infrastructure, drainage improvements, and roadway resurfacing.

For more information on the City’s Vision Zero initiative, go to https://www.vzhoboken.com/.