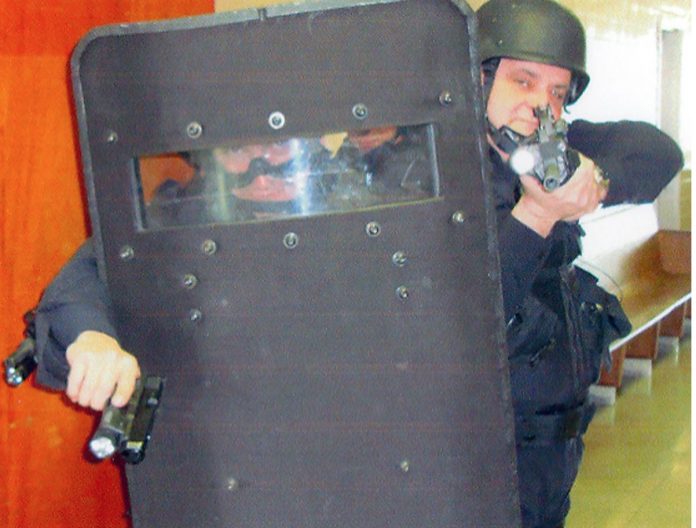 A request by Hudson County Sheriff Frank Schillari to the County Board of Chosen Freeholders for $26,000 to purchase additional riot gear, has been pulled from the Board’s Thursday agenda by Chairman Anthony Vainieri.  The Sheriff’s request was made in a letter dated June 3.

During a telephone conversation with Hudson TV this morning, Vainieri said “this is not the right time to consider this request.”  Vainieri said he has received numerous calls, emails and comments through social media against the Sheriff’s request for the funding following a Jersey Journal story published on Monday.

In his letter Schillari had asked the Freeholders to fund the purchase of 150 riot helmets, plus tear gas, nonlethal foam bullets and riot control grenades.  Vainieri believes the climate in Hudson County during the demonstrations and protests against police brutality following George Floyd’s murder by Minneapolis Police, has been peaceful and non-confrontational.  Therefore, Sheriff Schillari’s request has been tabled for now.

Vainieri, in a phone conversation with Hudson TV earlier this evening, stated he was also pulling a resolution from Thursday’s agenda which would have provided funding for the purchase of ammunition by the County Prosecutor’s Office.  The Freeholder Chairman stated he believed the money would have allowed the Prosecutor’s Office to acquire approximately 1,000 rounds.  Freeholder Bill O’Dea will be seconding the removal of this resolution according to the Chairman.

Vainieri wants the Sheriff to meet with the Freeholder Board’s Public Safety Committee to go over his Department’s current supply of riot gear, much of which may be outdated.  Vainieri says to approve the funding before doing so would “send the wrong message to the public.”

Sheriff Schillari wrote in the letter that “these items are essential to provide protection to the Sheriff’s Office personnel during a civil disturbance.  With the public protesting more frequently and the potential of them turning violent, causing destruction to personal property and businesses requiring a large law enforcement response to restore order.”

Chairman Vainieri did not provide a date for a potential meeting between the Sheriff and the Public Safety Committee.

The New Jersey Department of Community Affairs has extended the open enrollment period for COVID-19 Emergency Rental Assistance. The enrollment extension now goes from today through July 17th at 5 p.m. Completion of the pre-application does not guarantee placement into the program, but it could mean...
View on Facebook
·Share

No one better than Anthony, attacking me is not going to help. Good luck Anthony 🇺🇸💪🏻