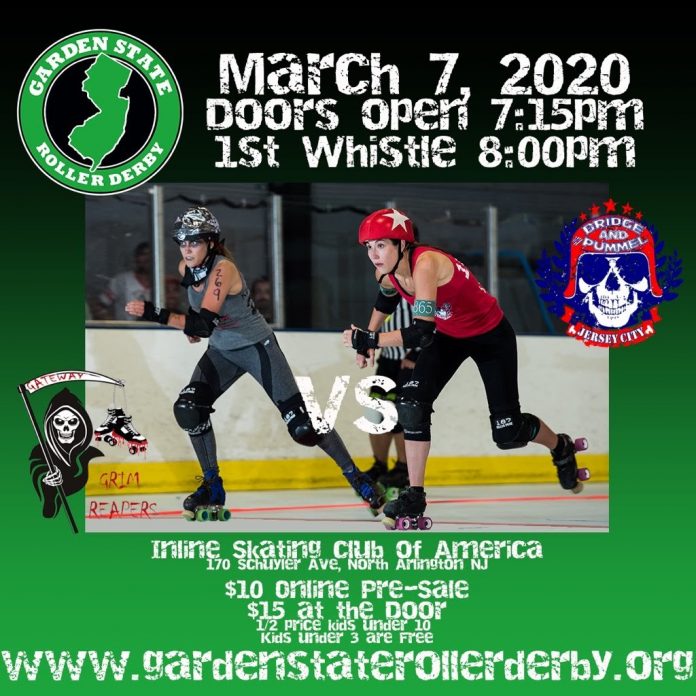 The league’s home opener will kick off a heated intraleague battle when the Gateway Grim Reapers face-off against the reigning home-team champs, The Northern Nightmares.

“Because of our glorious win of the home team championship trophy (with only seven skaters on our roster), we are now a hot commodity and have a whole new slew of recruits,” says Grim Reaper Co-Captain Swiss Mischief. “We look forward to meeting Bridge and Pummel on the track for heated competition and the chance to showcase the skills that lead to our reign!

The two teams will take to the track at the Inline Skating Club of America in North Arlington on Saturday, March 7. Doors open at 7:15 p.m. and the first whistle is at 8 p.m.

“It’s an honor to open the season by sharing the track with last year’s champs, The Gateway Grim Reapers,” adds Bridge and Pummel Co-Captain Faetality. “But don’t forget to bring lots of water because JCBP is going to be on fire!”

Spectators should be sure to get their tickets in advance at brownpapertickets.com. Admission is $15 at the door and $10 online. Children under 10 are half-price.

Fans will also be able to shop for brand-new GSR merchandise and participate in a bake sale and raffles.

Garden State Roller Derby are New Jersey’s premier flat-track roller derby league, consisting of approximately 40 skaters. The league has two traveling teams, the all-star Ironbound Maidens and the B-team, the Brick City Bruisers. In addition, there are three home teams, the Northern Nightmares, the Jersey City Bridge and Pummel, and the newest home team the Gateway Grim Reapers, who bout against each other throughout the season.

GSR is in Division 3 of the Women’s Flat Track Derby Association (WFTDA).