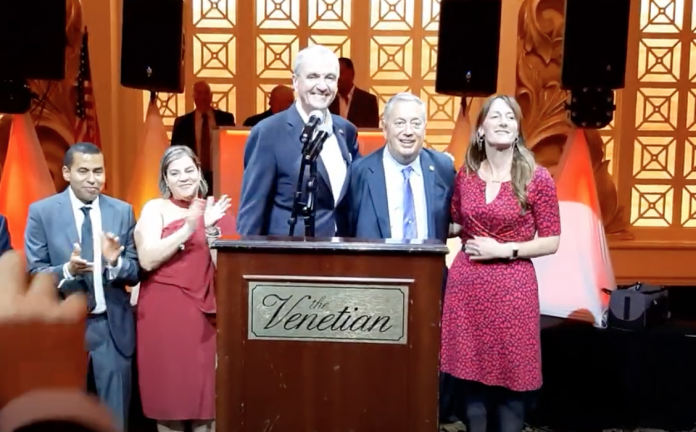 More than to thousand people, some of the most loyal Democrats in New Jersey, from Governor Phil Murphy to Assembly Speaker Craig Coughlin to State Democratic Party Chairman and Essex County Democratic Chair LeRoy Jones to the Democratic Chair from Bergen County, packed the Venetian in Garfield on Thursday night for State Senator and North Bergen Mayor Nicholas Sacco’s annual fundraising ball.

This event has been held for more than two decades, and everyone who attended heard the same message all night long.  Governor Murphy put it this way; “Hudson County will make the difference in putting us over the top.  We need you to come out on election day and support the Democratic line.  If not, this election is a coin flip.”  New Jersey has not re-elected a Democratic Governor in 44 years.  In order to defeat former Republican Assemblyman Jack Ciattarelli and his Lieutenant Governor running mate, former State Senator Diane Allen,  Murphy stressed that Hudson County voters need to vote the party line and not take the election for granted.

Every speaker praised the role Senator Sacco has played in leading the Democratic party in North Jersey.  All in all it was a night for Democrats to celebrate their party, and as North Bergen Commissioner Hugo Cabrera said, “Nick Sacco puts on one of the best parties anywhere.”