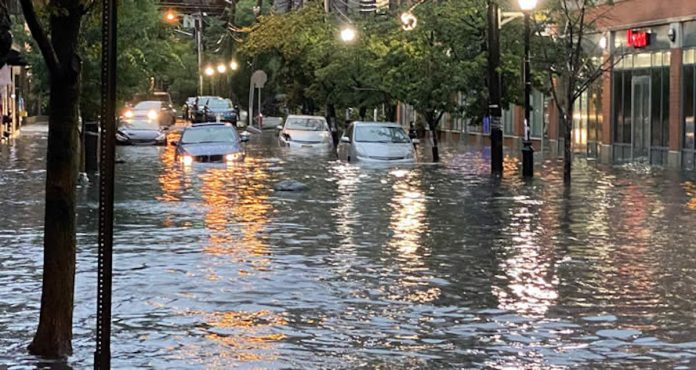 During a Wednesday morning press conference, Hoboken Mayor Ravi Bhalla announced that the Mile Square City is fed up.  It’s tired of suffering from severe weather damage, so it has taken a stance.  It has filed a lawsuit in Hudson County Superior Court against Exxon Mobil, Shell, BP, Chevron, ConocoPhillips and the American Petroleum Institute.

The basis for the lawsuit?  Damages incurred by the city due to the impact of climate change.

Everyone remembers how Hoboken suffered in 2012 as a result of Superstorm Sandy.  Many municipalities in the New York metropolitan region, as well as through the state of New Jersey, particularly along the Jersey shore, were hit hard.  Very, very hard.  Years went by and communities were still rebuilding.

As a result of Sandy, Hoboken experienced a 14-foot high storm surge and inches of rain, leaving approximately 80 percent of the city under floodwaters.  Basements were ravaged.   The Lackawanna Terminal and the PATH tubes were devastated by salt waters.  20,000 Hoboken residents were impacted, as the city’s centuries old sewer system was overwhelmed.  Raw sewage was everywhere.  It was a nasty situation.

Today, Mayor Bhalla said the city suffered, just from Sandy alone, about $100 million worth of damages.  Sandy, and other storms since then, have resulted in more damaging results, which the Mayor says has been exacerbated by climate change, driven by decades of fossil fuel burning.

Hoboken officials put the blame squarely on oil companies for ignoring climate change and continuing to burn fossil fuels on a global basis.  So, we have today’s announcement of the lawsuit against the oil giants of the industry.  “It’s time for them to pay up,” according to Bhalla.  Here is the 146-page complaint.

In a nutshell, the lawsuit maintains that the oil giants and the API have known for decades what the future impact of climate change would be, and they have chosen to ignore the science.  The suit says profits made from countries relying on oil and natural gas consumption are all the oil companies care about.

This lawsuit makes Hoboken the first city in the state to sue giant oil companies over climate change damages.  Should Hoboken be successful in its suit, the cost of which will not be placed upon the taxpayer, the city could reap hundreds of millions of dollars.  The Mayor says Hoboken intends to use the money, should the city win the lawsuit, to pay for its flood mitigation work, which has already totaled approximately $140 million during the past ten years.  Bhalla stated this morning that, “It’s time these companies pay their fair share and be held accountable for their actions.”

The City Council will introduce a resolution which pledges that any funds won from the lawsuit would go toward resiliency improvements at the Hoboken Housing Authority.  HHA buildings and equipment were severely affected by Sandy.

Not unexpectedly, some of the oil companies and API are denying Hoboken’s allegations. Others did not immediately respond to the lawsuit.  In the past three years, three states, the District of Columbia, about 15 municipalities and a trade organization have filed suits against oil companies over climate change damages.

It is not known at this point whether New Jersey and the Murphy Administration plan to join Hoboken’s lawsuit.