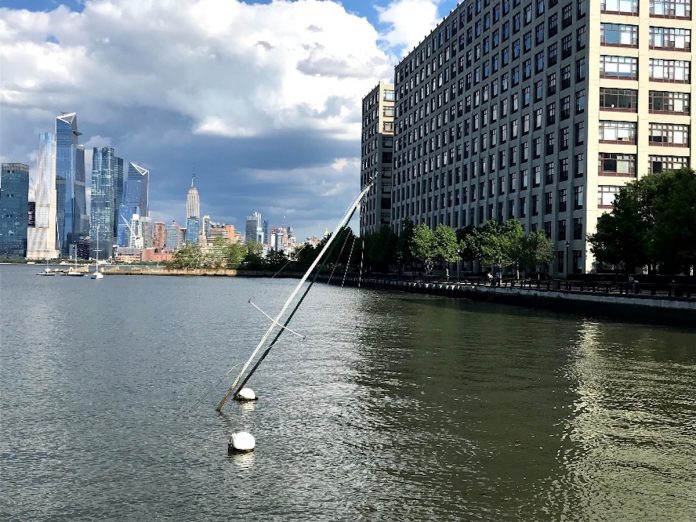 Through a partnership with Riverkeeper, the City of Hoboken will begin the first phase of restoring Weehawken Cove this fall.

The City of Hoboken has announced it has secured over $235,000 in grant funding to remove sunken boats and marine debris from Weehawken Cove.

Weehawken Cove has long been utilized as a boat graveyard, littered with over a dozen sunken, derelict, and abandoned boats. The City has proactively removed these sunken vessels in the past whenever they pose an imminent threat to public safety, but now, with the help of this grant funding from the National Oceanic and Atmospheric Administration (NOAA), all of the boats will be removed.

Removing the vessels will eliminate the potential release of harmful metals and chemicals, such as oil and mercury, as well as plastics and fiberglass, thereby helping to restore the local ecosystem.

“These sunken vessels have polluted the Hudson River to the detriment of marine wildlife for far too long,” said Mayor Ravi S. Bhalla. “After years of attempting to identify the irresponsible owners of these boats and taking it upon ourselves to remove them at the City’s expense, I am pleased that now, with the help of our local and federal partners, we will be able to remove all the boats from Weehawken Cove. I thank the National Oceanic and Atmospheric Administration, New Jersey Department of Environmental Protection, the Hudson County Board of Commissioners, Hudson County Executive Tom DeGise, the Hoboken City Council, Riverkeeper, and the New York-New Jersey Harbor & Estuary Program (HEP) for providing the City with the funds to restore this area of the Hudson River.”

The 24-month long project will remove the vessels and other marine debris and include a public education campaign to help prevent the future abandonment of marine vessels, create a living shoreline, repair bulkheads within Weehawken Cove, and help restore marine habitats in the Hudson River Estuary.

The City will begin removing the vessels in the Spring of 2022 once a qualified salver is selected.

Removing the sunken vessels is part of the City’s overall initiative to improve Weehawken Cove, including the construction of Cove Park that will help mitigate future flooding, installation of a living shoreline that supports the growth of marine mollusks and filter feeders, educational activities and volunteer opportunities to restore and maintain critical wildlife ecosystems, possible installation of a reef in or near Weehawken Cove, and ongoing maintenance of Hoboken’s waterfront walkway through public and private partnerships