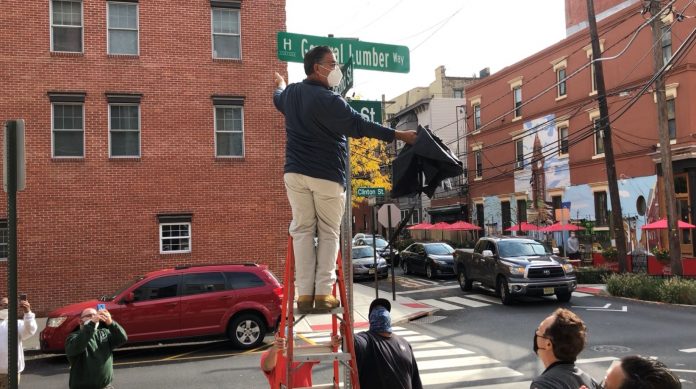 Mayor Ravi S. Bhalla and the City of Hoboken honored a longtime family-owned business, General Lumber, with a ceremonial street renaming at 2nd and Clinton Street. General Lumber owners Esther and Donald Grauso, along with staff joined City officials for the celebration, where a “General Lumber Way” sign was unveiled outside of the store. General Lumber has been family owned since 1967.

“General Lumber has been, and will continue to be a staple of our community,” said Mayor Bhalla. “Esther, Donald and their staff represent the very best of Hoboken, as a family owned business that has gone above and beyond to literally build up our mile square into the great place it is today. The honorary street renaming is a small token of our appreciation for everything they’ve done, and we look forward to their next 50 years in business!”

“On behalf of General Lumber, we want to thank the City of Hoboken for recognizing the contributions of our family owned business,” said Ms. Grauso. “For over 50 years, General Lumber has been a mainstay of Hoboken residents and families. We have been, and always will be there for the community during times of need, and look forward to many more years of serving the people of Hoboken.”

Also joining Mayor Bhalla and General Lumber for the ceremony was Freeholder Anthony Romano who advocated for the honorary street renaming, as well as Council members Emily Jabbour and Phil Cohen.

Paul Lopes, Esther’s father, along with Robert Drasheff purchased General Lumber in 1967, which had been in operation since the 1930s. In 1986, Esther and Donald took on the role of owners. Since that time, General Lumber has been providing services for Hoboken, and has played a central role in helping the City rebuild buildings and homes after hurricanes, floods, fires, and other natural disasters. Most recently, General Lumber worked with businesses to supply wood and building materials for parklets and streateries for local businesses.

The Lopes family immigrated to the United States from Italy in the early 1900s, with three generations of family that have been born and raised in Hoboken. Two of Esther’s three children, Jenna and Jessica currently live in Hoboken. Jenna is currently a kindergarten teacher at Brandt School, while Jessica is a real estate agent in Hoboken.