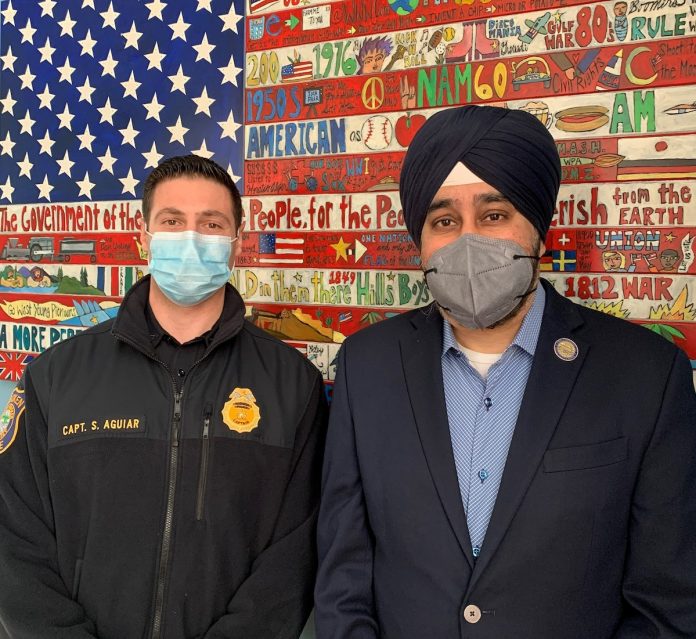 Captain Aguiar, a Hoboken native, joined the Hoboken Police Department in 2002. During his 20 years with the department, Captain Aguiar served as a Uniform Patrol Officer and Detective with the Vice Unit. He has also commanded the Bureau of Internal Affairs, the department’s Technical Service Bureau, and the Emergency Response Unit and he has served on the Chief’s command staff since 2018. He is also a member of the City’s Policing Policy Task Force.

Throughout his tenure with the department, he has received numerous awards for his service, including the Gallantry Star, Meritorious Service Award, Exceptional Service Award, Honorable Service Award, and Life Saving Award, among others.

“After conducting a thorough search for a new Police Chief, I found that I didn’t have to look far,” said Mayor Bhalla.  “Captain Aguiar has outstanding leadership, team-leading abilities, and the respect of his fellow officers inside and outside of the department. I look forward to working with him and the entire Hoboken Police Department as we create a safer Hoboken for all of our residents.”

“I am honored to continue to serve the City I love in this new capacity,” said Captain Aguiar.  “I would like to thank Mayor Bhalla for the opportunity to lead the Hoboken Police Department, and I look forward to working with my fellow officers and the administration to modernize the department, keep residents safe, and enhance community relations.”

“I know that I am leaving the department in good hands under the capable leadership of Captain Aguiar,” said Chief LoBue.  “Captain Aguiar is an officer of integrity who possesses the experience and knowledge to lead the department in the years ahead. I know he will continue to serve the City and its residents well.”

“I’d like to extend my warmest congratulations to Captain Aguiar on his promotion to Acting Chief,” said Councilman Joe Quintero. “Captain Aguiar represents the best of us, a home-grown talent with a distinguished career whom we can all look up to. As Chair of the City Council’s Public Safety Subcommittee, I look forward to working closely with him over the next few years.  Also, as a fellow Hispanic American, I am proud to see Captain Aguiar take on this new responsibility as just the second Hispanic Acting Police Chief in our city’s history; diversity and representation within our city’s leadership matters and is critical to our success.”