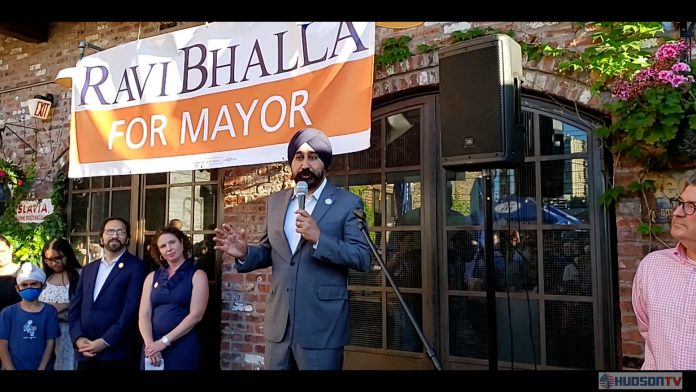 Hoboken Mayor Ravi Bhalla officially launched his campaign for re-election this November by delivering a speech to his friends and supporters at the Pilsener Haus & Biergarten on Thursday Evening.

Councilmembers Phil Cohen and Emily Jabbour each spoke in support of Bhalla prior to the mayor addressing the crowd himself.

“It’s been an honor and a privilege to serve for the city of Hoboken for the last four years, we’ve all come together as a community to accomplish a lot.” Mayor Bhalla said in an interview with HudsonTV. “Everything from acceptable development, reigning in on property taxes, improving our infrastructure, and creating a city… that combats the effects of climate change, but doing it as a community in collaboration.. I look forward to working hard on the campaign trail and hopefully a victory in November.”

If re-elected in November, this would be Bhalla’s second term in office; the 2017 Hoboken mayoral election was decided by less than 500 votes in a tightly contested race between 6 candidates.

To watch the full speech from the event, visit the HudsonTV facebook page here.