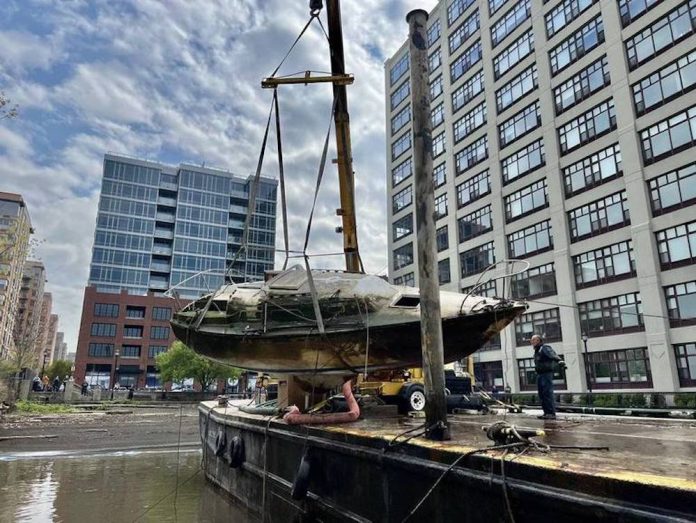 The removal of the last of the abandoned and derelict boats from Weehawken Cove has been completed, ending the first phase of the Weehawken Cove Restoration Project that will transform Hoboken’s northern waterfront over the next 24 months.

“I am proud to share the update that all of the hazardous boats in Weehawken Cove are finally gone, after nearly a decade of littering our public waterfront,” said Mayor Ravi Bhalla. “This project is a critical first step in our transformation of Weehawken Cove, which will also include a living shoreline and the creation of Cove Park in the years to come. Thank you again to our federal, state and local partners, along with residents for the advocacy and support for the grant funding that helped pay for the removal of the boats.”

The City began to remove the abandoned vessels on May 2 following the award of over $235,000 in grant funding from the National Oceanic and Atmospheric Administration (NOAA) last year, which the Bhalla administration applied for in September of 2020. The award was made possible through local advocacy from residents and federal representatives, including Senator Bob Menendez, a lead sponsor of the Save the Seas 2.0 Act. 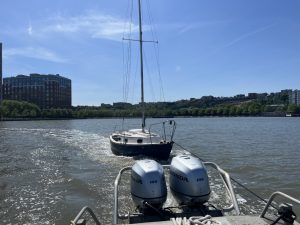 “I’m proud to have authored the Save Our Seas 2.0 Act, which has already begun addressing the debris crisis threatening coastal ecosystems and communities and harming marine life. Pollution in our waters is a global problem with dramatic and enduring implications for our livelihoods and well-being,” said Sen. Menendez.“I’m glad Hoboken was able to use federal funding to remove the abandoned boats and begin their waterfront revitalization.”

“We are pleased to celebrate this accomplishment with the residents and City of Hoboken,” said Nancy Wallace, Director of the NOAA Marine Debris Program. “Abandoned and derelict vessels are an environmental and economic problem across the nation, and this project shows how removing them can help to improve coastal resilience and allow people to safely enjoy the waterfront again.”

Up to 14 abandoned and derelict boats have littered Weehawken Cove over the past decade, some remaining since Superstorm Sandy and others abandoned by boat owners. The City has proactively removed these sunken vessels whenever they pose an imminent threat to public safety at the City’s expense however, the City has sought reimbursement from the owners if the boats contained identifiable registration numbers.

Removal of the vessels eliminates the potential release of harmful metals and chemicals, such as oil and mercury, as well as plastics and fiberglass, thereby helping to restore the local ecosystem.

The City will soon launch the second phase of the project and issue a bid for a contractor to rehabilitate the 16th Street bulkhead. Once repaired, the City will create a living shoreline that supports the growth of native plants and filter feeders, restores marine habitats in the Hudson River Estuary, and will launch a volunteer beach cleanup and education campaign to help prevent the future abandonment of marine vessels. These efforts are funded in partnership with the Hudson County Open Space Trust Fund and the New Jersey Department of Environmental Protection Green Acres program, with the assistance of Riverkeeper and the New York-New Jersey Harbor & Estuary Program.

Bulkhead repairs are scheduled to begin this summer once the City selects a qualified contractor.

The boat removal paves the way for the creation of Cove Park at 15th and Garden Streets as part of the NJDEP’s Rebuild by Design project. The City will begin construction of Cove Park next year. The two-acre park will double the size of the current Harborside Park and include above-ground amenities to protect the City from flooding caused by storm surge events, such as Superstorm Sandy.

For more information on the Rebuild by Design project, go to https://www.nj.gov/dep/floodresilience/rbd-hudsonriver.htm.