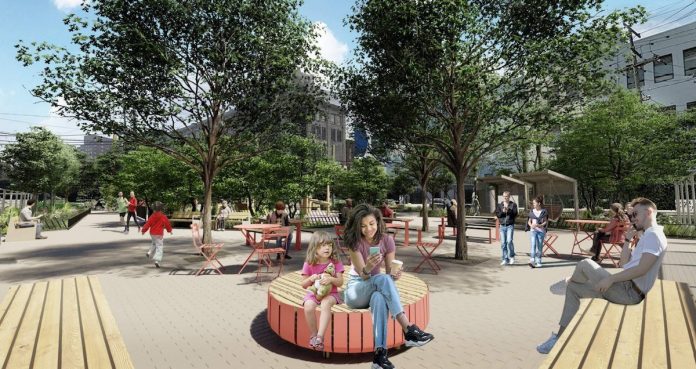 Park will detain 260,000 gallons of storm water using above and below ground infrastructure 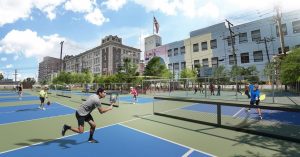 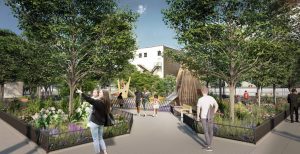 CAPTION: The new addition to the Southwest Resiliency Park will include six pickle ball courts, a shaded plaza, playground, a full basketball court, and rain gardens.

Mayor Ravi Bhalla and the City of Hoboken today unveiled the final concept design for the expanded Southwest Resiliency Park that will serve the dual purpose of providing recreation space and flood mitigation. The expansion doubles the size of the existing one-acre Southwest Resiliency Park at 58 Jackson Street, and will include six pickle ball courts, a centrally located shaded plaza with tables and seating, a playground for children, a full basketball court, restroom facilities, and rain garden plantings. 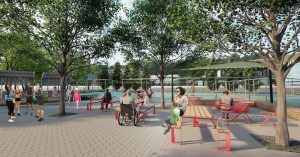 Four concept designs were presented to the public earlier this year, with the final amenities reflecting feedback through community engagement sessions and an online public survey. 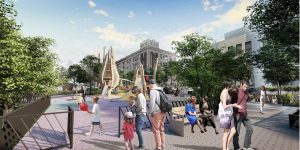 “I’m proud that the final design of our expanded Southwest Resiliency Park reflects months of public feedback, and provides a number of much needed active amenities for our community,” said Mayor Bhalla.  “This is yet the latest, major initiative that will also help Hoboken adapt to climate change and more frequent rainstorms, with innovative flood mitigation strategies. I look forward to celebrating the beginning of construction with all of Hoboken next year!”

“This latest step in realizing the vision of what is the Southwest Park serves as a lesson in perseverance,” said Councilman at-Large Jim Doyle, chair of the Environmental Services Subcommittee.  “It served as the inspiration for then-budding activist Dawn Zimmer to get involved in her community, and all these many years later it will both add to our open space and to our critical inventory of resilience measures to help us combat the effects of climate change.”

“I have long advocated for active recreational space in southwest Hoboken and I am proud to have worked with the administration and my council colleagues to get one step closer to making this a reality,” said 4th Ward Councilman Ruben Ramos. “I want to thank the Mayor for inviting me to be part of the negotiations to acquire this property from Academy. Through the public design process, we believe we have a park that serves dual needs in providing recreation and flood mitigation in Southwest Hoboken.” 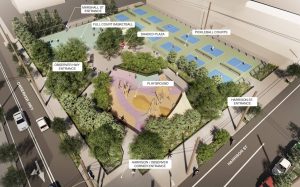 The expanded Southwest Resiliency Park will more than double the stormwater detention capacity in the existing park, withholding a total of 460,000 gallons of stormwater to mitigate area flooding during heavy rain events through above and below-ground infrastructure.

The Hoboken City Council will vote on the final concept design on Monday, October 3, at 7 p.m. at City Hall located at 94 Washington St.  Members of the public can attend the council meeting in person or view it live on the City’s Facebook or YouTube pages.

After potential City Council approval, the project team will create engineering plans and apply for State permitting before the City goes out to bid for the park’s construction, with construction tentatively scheduled to begin by the end of 2023.

For more information on the Southwest Resiliency Park expansion, go to www.hobokennj.gov/swparkphase2.