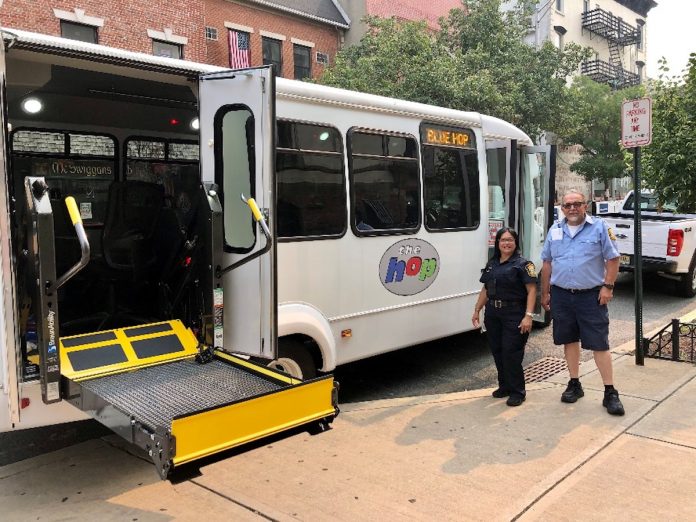 The Hop shuttle service allows residents to move around the mile-square city more easily at no cost to riders. It is an important part of the City of Hoboken’s efforts to improve accessibility for people who chose to or cannot drive and compliments other existing programs, including the ongoing expansion of Citi Bike, bicycle and pedestrian safety improvements through the Vision Zero initiative, and Corner Cars the city’s car sharing program.

“The Hop shuttle service connects residents throughout Hoboken to vital city services and transportation hubs without burdening their wallets,” said Mayor Bhalla. “These new, modern buses will not only improve service but also increases accessibility for residents of all ages and abilities.”

The two new Hop shuttles replace two older shuttles that will now be used as backup vehicles in the City’s fleet.

Hoboken Hop operates Monday through Friday on four separate tracks: the Blue Hop, Green Hop, Red Hop, and Senior Shuttle, all of which stop at the Hoboken Terminal.

Accessing the free shuttle service is easy, as passengers can track the buses in real-time online or via the “Passio Go” app and then flag a bus at any intersection along its route. Buses will then cross the intersection and stop on the far side before opening their doors. To notify the bus driver of a stop, passengers can simply pull the stop request cord that runs along the upper part of the windows and the driver will stop at the intersection.

To download the new mobile app, Apple users can go to  https://apps.apple.com/us/app/passio-go/id1203861956  and Android users should go to https://play.google.com/store/apps/details?id=com.passio3.go&hl=en_US.

The shuttles can also be tracked online at https://hoboken.passiogo.com/.

Passengers must wear a mask when on the Hop.

For more information on the Hop, visit https://www.hobokennj.gov/the-hop.