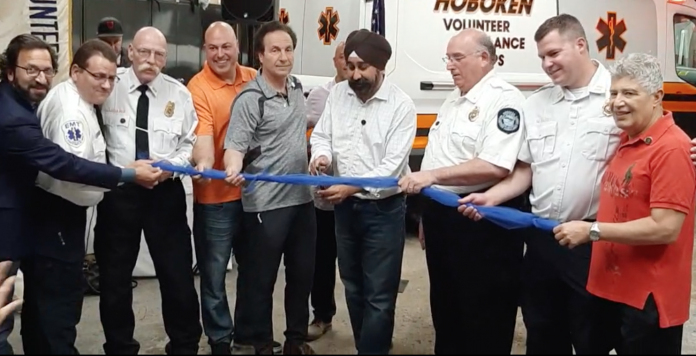 On Thursday night, June 3, the Hoboken Volunteer Ambulance Corps celebrated a very special event…their Golden Anniversary.  That’s right, the squad is 50 years old, having started on May 28, 1971, with its first call being a fire at then-Pier 5.

The Corps, which is housed at 707 Clinton Street, was founded with 14 volunteers by Bill Matthews and Edward F. McIntyre who felt the need for a more organized Emergency Medical Services (EMS) system in the Mile Square City.  At the time, the Hoboken Police provided ambulatory services for the local citizenry.

Living by the motto, “We Care. We’ll be There,” the Corps remains a volunteer organization to this day, responding to an average of 5,000 calls every year.

During the ceremony, Corps President Tommy Molta, who started with the squad 40 years ago, serving as President for the past 29 years, became quite emotional, recounting the thousands of calls the members of the Corps have responded to over the years; everything from fires, to the births of babies, to the 9-11 terrorist attack, to Superstorm Sandy which flooded the headquarters with five feet of water.

The biggest ovation came during Mayor Ravi Bhalla’s remarks.  Amid rumors that the Corps was in trouble of remaining intact, the Mayor stated, “This squad ain’t going nowhere.” Not exactly proper grammar, but you get the idea.  The Mayor emphatically announced the volunteers ambulance squad is here to stay.

It was certainly a well-deserved celebration.

It was stated during the celebration that the Hoboken Volunteer Ambulance Corps is the lone, remaining, volunteer ambulance squad in Hudson County.  That is partially correct.

in speaking with Weehawken Volunteer First Aid Squad President Gio Ahmad on the phone on Thursday night, Hudson TV learned that Weehawken’s squad is, in fact, two years older than Hoboken’s.  It celebrated its 50th anniversary two years ago, meaning they began in 1969. In addition, Ahmad told Hudson TV that volunteers can get a stipend for their time volunteering with the Weehawken squad. Technically, members of the Weehawken Volunteer First Aid Squad are not being paid.